…Palmer Drei. Why make it complicated when you can keep it simple? That is what the folks at Palmer thought, too. So they packed three separate single-ended tube power amplifiers into one case and left the rest up to us guitarists. There is one EL84, one 6V6, and one 6L6 pentode from which to choose. You can enjoy them straight up or mixed – according to personal preference. 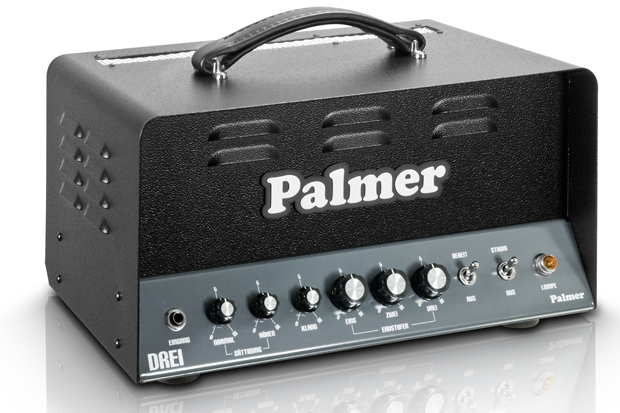 Being a tube freak makes for a lot of sleepless nights. From one end of the country to the other, they are busy changing and comparing tubes. They interact on Internet forums, constantly in search of additional knowledge. Now there is also a faster way. Palmer took a close look at the trend toward smaller tube amps, in which the power stage character is purposely used to shape the tone, and drew its own conclusions. For the traditional German company dares to be completely different from time to time – and it’s a good thing, too.

The metal chassis, which is extremely sturdy and hefty for a 15 watt amplifier, already shows that this amp is really a little different. Even the somewhat idiosyncratic, vaguely industrial looking optical appeal seems only logical. Take a closer look, and you will notice that, in a stroke of bravado, the front panel is labelled in German. Once the initial slight irritation has dissipated, you conclude: well, why not? After all, it’s not from London, LA or Shanghai, but is built by hand in Neu-Anspach, Germany. That’s a different way of showing your colours! The imitation-leather-bound user manual also evidences attention to detail. The preamp has two knobs for “Sättigung” or “saturation” (Normal and Höher/Treble) as well as a single “Klang” (i.e., “tone”) control, which is called precisely that and in essence is only a passive treble filter like on the guitar. With that, we are already down to the nitty-gritty, i.e., the power stage section. Here, extremely short signal paths are called for, since it is known that the dynamic reaction of an amplifier circuit benefits from this. 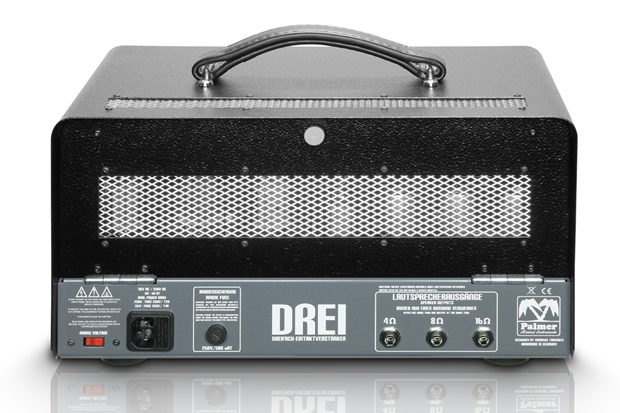 This guy is simply called the “Drei” (German for “Three”) and thus wears its heart on its sleeve … ehm … front panel. It has three different power stages that use different types of tubes: a thin EL84 for power stage one, a short 6V6 for the number two, and a fat 6L6 under number three. You can’t ask for a purer tube sound than with the Drei – but here you can mix it. The correspondingly numbered power stage knobs on the front panel of this little “joy generator” let you activate/deactivate the respective single-ended power stage sections. Of course, first you should hook up a suitable cabinet (4, 8 or 16 ohms), power up the amplifier, and, after a minute, switch it to “Bereit” (ready). By the way, I chose a large, semi-open 2 x 12″ cabinet with OEM speakers by Eminence, which I like because of their balanced reproduction. (If you have some catching up to do in this regard, there is an extensive test of Palmer’s custom-made cabinets in the 03/11 issue of SOUNDCHECK.) OK, so what do you do with the DREI now? Play around with it to your heart’s content, of course!

After setting the preamp knobs to 12 o’clock, I plug in a semiacoustic with humbuckers and first try out the different sections individually. The impulse fidelity and incredibly sensitive response spontaneously make me enthusiastic. Yeah, that’s the way it should be. That’s why people love this old-fashioned single-ended concept. The amplifier practically seems to be connected directly to my picking hand. This lets you vary the tonal character from crystal clear to heavily distorted effortlessly while playing. Of course that is impressive, but other amplifiers can do that too.

It gets even more interesting when you then start comparing the various power pentodes directly with one another, which is no problem at all in this case. Just turn one knob down and the next one up – this is really fun! “Eins” (EL84) has a bite to its bark and then begins distorting from the treble frequencies downward. The offensive mids are increasingly compressed; the bass is rather subdued. This is certain to help the guitar assert itself. “Zwei” sounds smoother, more supple, and somehow “smaller”, but it is precisely this that makes it unusually charming, especially with blues lines or slide licks. Apparently, the 6V6 tube has never heard of wicked or raspy tones. In sector “Drei”, the sound becomes noticeably louder and you immediately sense the greater reserves of the 6L6 pentode. The bass frequencies sound deeper and more powerful, yet also tauter than with the other two sections. 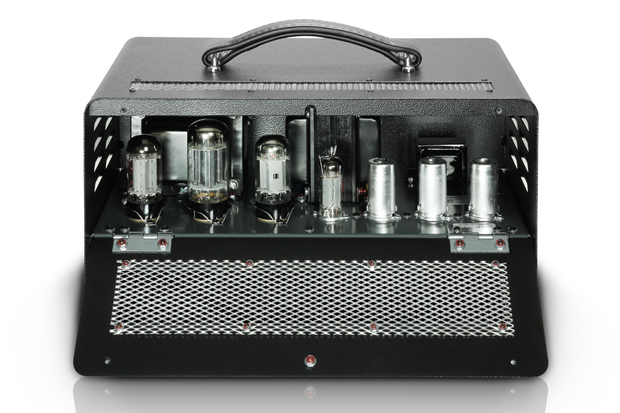 If the various tube characteristics are already very much worth listening to on their own, an additional, entirely new dimension opens up when you begin mixing the sections with one another. You just can’t get this kind of specific dynamic response and frequency-dependent clipping with any EQ, booster or overdrive effect – or, for that matter, with any other amplifier. In a manner of speaking, it is like “instant multi-amping” – but much more practical! It’s incredible how detailed and nuanced this tube circuitry, which is actually quite simple, can sound thanks to this. You could spend hours without running out of new and interesting combinations to discover. By all means, you should also include the two preamp knobs in your experiments.

If you turn up “normal” and “treble” just a little, the compression increases; the other way around, it sounds more aggressive and open. Turning up both knobs all the way is enough to make even a crisp single-coil guitar really sing. By design, this three-way, single-ended amp never gets really “nasty”. The only thing that may be “heavy metal” about this amp is the case. At most, with a guitar with humbuckers, you can manage to crank out a powerful hard rock solo. It’s not intended to provide more distortion than that, but the distortion that you can get out of it sounds really tasty.

Just a minute, I think I hear the doorbell … no, wait – that’s just the ringing in my ears! Did I already mention that 15 tube watts turned all the way up can be really loud? However, the “Drei” can also sound good at pleasantly low volume. If you turn up the preamp controls a good bit and dial back the power stage, you should even be able to practice in your own bedroom. (Get those dirty thoughts out of your heads … I’m talking about playing guitar!) However, the main applications for the Drei will surely be in the recording studio and on club stages. So it seems that all good things really do come in threes: my guitar, my amplifier, and I – thanks, it works for me!