The Newspaper FAZ is thrilled! Palmer DREI – One amplifier for each Sound

The Palmer Drei makes guitarist’s dreams come true and promises “distortion in its purest form”. We can certainly confirm this: A three-way, single-end amplifier for the eternal seeker in us all. 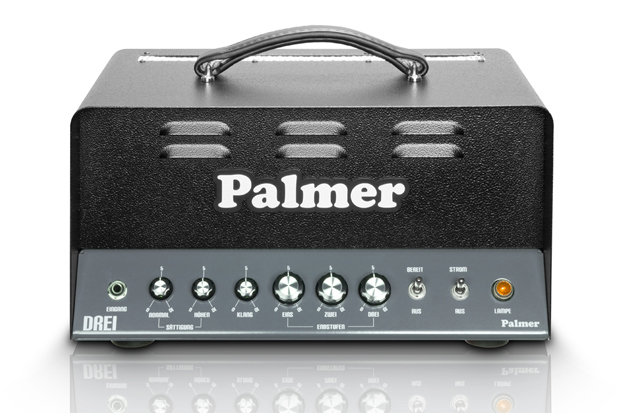 Guitarists usually all suffer from the same ailment: They are caught up in the eternal quest for the one true, holy tone. Thus the basement practice room of many an aspiring rock or blues hobbyist is likely to house an arsenal of crates large and small bearing names such as Marshall, Fender, Vox or Mesa Boogie. When a gig approaches, despite the wealth of models, it is a matter of deciding which guitar to play through which amplifier on the night. This usually comes down to an “either/or” decision. Retrievable sound presets of the kind offered in floorboards or digitally based modelling amps are often abhorrent to tube-enamoured sound purists – who, after all, are on a quest for the one pure tone.

The secret behind the sound of an amplifier essentially has to do with the type of tubes used. EL 84 tubes give an amplifier a punchy, “British” sound with plenty of mid-range presence, on the pattern of vintage Marshall and Vox amplifiers. Designs using 6V6 tubes, on the other hand, reference vintage Fender amplifiers with their clear, treble-rich sound. Other tubes, such as the 6L6, combine a little of both worlds. The German musical electronics vendor Palmer has sprung into this breech with an innovative idea. They pack one tube of each of the aforementioned types into one amplifier. The ECC83 and 12AX7A are specified as preamplifier tubes.

Thus the Palmer Drei is a three-way, single-ended amplifier. Implicit in the single-ended tube circuit is that the output of a single tube is only approx. five watts. That is not much and is usually on the scale of a recording and practice amp for use at home. But is that also enough for a small club gig or at least to be heard over the rest of the band in a rehearsal space? What makes the Palmer Drei special is that it permits infinitely variable mixing of the three different types of tubes. If you do that, you already have a respectable 15 watts of tube power at your disposal.

But enough theory – now for the practical test. The first thing you notice when unpacking the little powerhouse is that this is a quality product. The Palmer Drei weighs in at a whopping 15 kilograms in its sturdy, black metal housing. The control panel is as unusual as it is clearly organized. In addition to the input socket, there are only six knobs, with no English wording and self-explanatory German labels. Under the collective label “Saturation” are the “Normal” and “Treble” knobs. Under “Output stages” are the assignments One (EL84), Two (6V6), and Three (6L6). Nestled in-between is a “Tone” control. The rear panel is equally well organized. In addition to the power supply connector, the only things worthy of note are the speaker outputs for 4-, 8-, and 16-ohm cabinets. We conducted the test using a closed-back cabinet with two 10-inch speakers.

After turning on the amplifier, we waited the obligatory five minutes for the tubes to warm up. In our test, the humbucker faction (pickups with powerful double coils) was represented by a Gibson Les Paul, a Gibson Flying V, and a Gibson Explorer. The single coil family of guitars was represented by a Fender Telecaster, a Fender Stratocaster (both of them Custom Shop models) and a Gibson Les Paul Studio with soap bar pickups.

When it comes time to learn your way around the unusual control panel, Palmer’s exemplary manual is a big help to the user. It depicts five different combinations of control settings that are labelled Blues, Hendrix, Clean, Full Distortion, and Funk. Thus in theory, with our setup with six guitars, this results in thirty different sounds with which the guitarist can begin to explore the amp’s capabilities.

The result is a raucous wave of sound

To get right to the point: The Palmer Drei is capable of producing not just thirty, but an infinite number of sounds. Each guitar requires different settings. With the innovative Drei, Palmer promises “distortion in its purest form”. We can certainly confirm this. With pure joy in playing, we tested the Gibson Flying V with aggressive alnico pickups using the recommended settings for Full Distortion. In this configuration, all three tubes are turned up all the way, as well as the Treble and Tone controls, while the Normal control is set to zero.

The result is a raucous wave of sound, which, however, conveys the nuances of the guitar and the guitarist. On the other end of the tonal spectrum, we tried out the Telecaster with the recommended parameters for Funk. The result is simply overpowering. Percussive bass tones, paired with treble-rich two- and three note funk chords, come across with a crystal clear spryness that will leave you eyeing that collection of Motown records on the shelf with longing.

The Palmer Drei is addictive, because it is the ultimate toy for any guitarist on the eternal quest for the perfect sound. Workmanship and sound are excellent. Whether blues, funk or rock – with the right type of guitar for each, the Palmer Drei produces authentic sounds.

The idea, which is as simple as it is impressive, of infinitely combining three different output stage tubes with effective and nuanced volume and tone controls gives any guitarist the chance to approximate his or her ideal sound with the instrument as closely as possible. The amp is loud enough for use in the practice room and at small gigs, especially when all three tubes are used. The Palmer Drei is available from qualified musical instrument dealers and costs around 1100 Euros.

All additional information about the Palmer DREI can be found online at:
http://www.palmer-germany.com/mi/en/DREI-Triple-Single-Ended-Amplifier-PDREI.htm