Nashville, USA/Neu-Anspach, Germany – August 2nd, 2017 – From July 13th to 15th, the international MI industry convened at the Summer NAMM 2017 in Nashville, Tennessee. Over 1,600 manufacturers and companies made the trip to the Music City Center to present their latest products and technologies to almost 15,000 visitors. Also in attendance was the Musical Distributors Group (MDG), which, as the exclusive U.S. distributor of the Adam Hall Group, presented the brands LD Systems® and Gravity® at the trade fair. 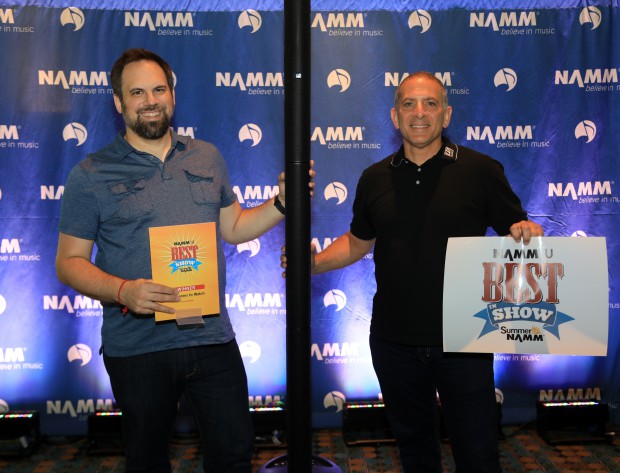 “In addition to the Gravity® stand solutions that made their NAMM debut this summer, we were particularly excited about the buzz surrounding LD Systems® products,” explains Steven Savvides, President, the Musical Distributors Group. “Amongst the highlights were the CURV® and MAUI® series, including the new MAUI® G2 range.”

NAMM Award: Best in Show
The popularity of the Adam Hall Group PA brand was also confirmed during the “Best in Show” award ceremony. Here, LD Systems® triumphed with the introduction of the MAUI® 5 GO system, taking home the coveted “Best in Show – Company to Watch” award from the NAMM jury.

MAUI® 5 GO vs. Line Array
The award ceremony was held in the Music City Center’s grand ballroom. To showcase the advantages of the innovative products from LD Systems®, MDG placed a single portable MAUI® 5 system on the ballroom stage and put it up against the installed line array system with several 18” subwoofers – live in front of nearly 600 guests.

Steven Savvides describes the ‘Aha-effect’ as follows: “When we presented the MAUI® 5, we switched from the house system to the individual MAUI® 5. The audience was certainly impressed, which was also made evident by the large crowds flocking to the system after the ceremony. Many agreed that even at the back of the large hall, the audio quality was extremely clear, crisp and articulate.”

The categories were:
-Best In Show — The best product or service that panelists saw at Summer NAMM
-Companies To Watch — Exhibitors with trendsetting products and/or services
-Gotta Stock It — Products that retailers want to stock right now, if they haven’t already
-Best Accessories And Add-ons — A great product from the small-goods arena