A toy for grownups and real tube tone for your living room, no power soak required: The Palmer “Eins” is an all-tube amp with an output power of one watt. It puts power stage distortion with all of its fullness and nuances at your fingertips, even at quiet volume levels. The trick? Palmer uses a preamp tube as a power stage tube, resulting in harmonic distortion at low volume.

Have you ever visited the website of an exclusive designer? If so, you will have noticed that while they may be peddling a name, what really makes the products exclusive is that you can’t buy them just anywhere, but only at a few “flagship stores” scattered sparingly around the globe. If do manage to find a designer who deigns to sell his wares online, then the extravagant prices are enough to scare off the average buyer who has decided “it’s time to treat myself to something.” What does that have to do with our Palmer living room amp? Maybe you’ve seen a pair of leather gloves in the Bottega Veneta shop that you could treat yourself to, for 390 dollars. Pricey, sure, but also good: an “affordably priced” taste of those expensive dreams. It’s a little like someone treating himself to 1:18 scale-model Porsche, in the allusive hope that one day – given the right means – it will grow into the real thing.

OK, the situation is a little different with boutique tube amps. Even the most expensive models are bound to become affordable sooner or later with a little upper-middle-class drudgery (or an almost unspeakably large number of lines of writing). The vintage amp market has also remained rather “tame”. But a Porsche owner may decorate his desk with a scale model of his “baby” so that he can automatically reassure himself at a glance of the hard-won fruits of his management skills. Or maybe it graces his living room as a symbol of the sporty horsepower with which he sometimes tries to escape his weighty responsibilities for a little while.So why shouldn’t a guitarist have a similar “scale model” in his living room?

The Palmer, a 1-watt tube amp, is a similar “big boys'” toy, but one in which only the volume has been “scaled down” and not the sound. As befits its output power, the model name “Eins” (German for “one”) is emblazoned with slightly martial, industrial charm on the front panel. Until now, Palmer has made a name for itself above all with small and large “helpers”, through solid practical solutions to problems that musicians would like to see banished from the world. Take power supplies, effects, DI boxes, and speaker simulators, for example. Palmer also makes amps that are well worth hearing, even if it is hard to think of an amp as a problem. Sometimes, however, with both amps and guitars – less is more.

In the wake of the boom for all-tube amps with less-than-ear-splitting output and the quest for power stage distortion for use in studios and practice rooms or at home, Palmer wanted to offer an appropriate all-tube model that would stand out through appropriate options in addition to very low power. This is teamed with a speaker simulation that is equivalent to the circuitry of the Palmer PDI-09 “The Junction” guitar DI box. The simulation is connected to a load resistor, so that the amp can also be used without speakers. The high-impedance output makes the power stage signal available as a high-impedance instrument level signal. If necessary, the amp can be connected directly to the input of an additional amp or power amp. In theory, it can even be added to a pedal board as a “power stage distortion pedal”.

The idea unveiled as a head way back in 2006 by the creative little tube technology manufacturer Finetone BF – using preamp tubes as power stage tubes – has since taken the “living room” market by storm. The Palmer amp uses the same principle as the little Fender “Greta” combo and the Vox “Little Nighttrain”. As standard, Palmer uses an ECC83 tube in the preamp stage and an ECC82 in the power stage. If you like to experiment, you can also try out other ECC combinations (EEC81, 82 or 83 in the power stage) in order to make the amp even quieter, make it distort faster or increase the clean range and headroom and influence the colouration of the distortion. 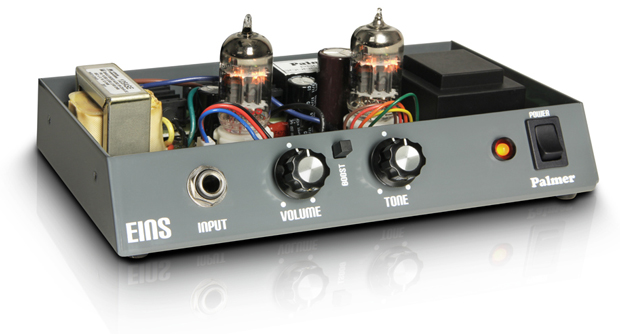 There are other, different amps that inhabit the same realm. The Jet City Picovalve is fundamentally louder than the “living room” amps, but covers similar “home needs” with a 2-watt circuit. There is also the Z.Vex “Nano” head, but it uses an entirely different type of tube, the 6021.

The first disillusionment: Small may be beautiful, but it can also be contraproductive – at least where setup is concerned. The Palmer just won’t fit right on the 1×12″ Divided by 13 cabinet for the test. The handle on the speaker cabinet is in the way, and the base of the little head doesn’t have enough clearance to fit over it. So, grudgingly, we wound up positioning it diagonally to one side of the handle instead. That sinks any prospects of living room symmetry, but the disappointment doesn’t last long.

The control panel on the partly angled front panel can be used while standing, similarly to the Diezel heads. The test cabinet is loaded with a Celestion “Gold” speaker that stands out because of a high efficiency factor. According to a meter in front of the cabinet, the “Eins” attains a maximum volume of 83 dB peak and 70 dB RMS. Measurement guru Eberhard Sengpiel reports that this is equivalent to a vacuum cleaner at a distance of one metre (i.e., three feet). So at most, the “Eins” is just as loud as your household dust buster, but sounds substantially more refined. It has a nice “edge” with a crunchy attitude. The amp offers some sweet compression. Nevertheless, it can also do a good job of simultaneously reproducing multiple tracks that have been sampled with a looper – which is also a typical “home application” in addition to just playing through it – without drowning in “mud” from the compressed input signal, shutting down, and ruining the signal separation.

They kept the controls simple: Volume, tone, and a boost switch for more overdrive. There’s really very little you can do wrong. “Tone” serves as a treble and/or presence control that adjusts the tone colour. The test guitar, a 52 reissue Tele, sounded best between the 10 and 11 o’clock positions. Above that, it was disproportionately bright at around 3 kHz and below that the clarity seemed “cut off” at around 3 kHz. In a side-by-side comparison, the Fender “Greta” connected to the Divided by 13 cabinet offers brighter overtones, more pronounced bass response at around 300 Hz, and more expansive saturation with higher resolution around 2 kHz. The tone is less compressed, but for that the amp reacts more dynamically to variations in picking attack.

The Palmer’s strong suite, on the other hand, is its clean sounds, of which it offers a wider range that covers more territory than the “Greta”, which tends to reach saturation pretty quickly. One hidden, but all the more gratifying strong point of the “Eins” is its “virtual” implementation: the speaker simulation is impressive because of its dynamic response, which differs only slightly from that of a real speaker and sounds a little brighter in the upper mids around 2 kHz with less “low-mid oomph” and rawness around 400 Hz. However, these are only nuances. Gone are the days when speaker simulations mutated into adenoidal abominations or you even kept a digital amp simulator around to use its speaker simulation for playing through headphones, which gave it a job and a right to existence that really wasn’t justified by its muted tonal characteristics and sponge-like response. There is finally a way to hone your technique and attack playing through a mixer with headphones – without the feeling of floating in a sea of uncertainty for lack of refined response. 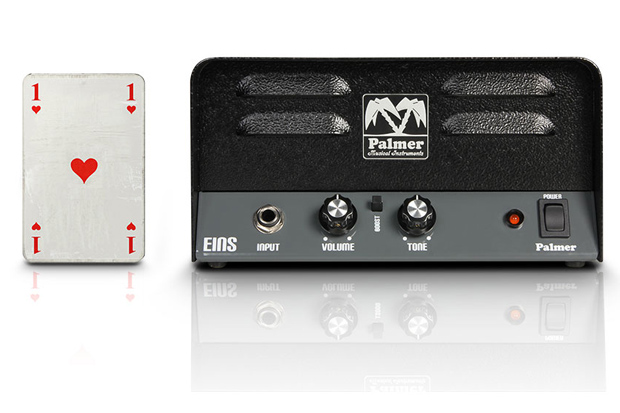 Above all, this amp’s strength lies in its capabilities for nuanced adjustment of its clean tones, and the volume even makes it safe to doodle around with your family in the same room. It may lack individual bonus features found in its competitors – for example, a line-in like the “Greta” has for listening to music with your smart phone. However, the successful speaker simulation and the amp output that lets you send the all-tube distortion to other equipment make it really unique. The fact that it is as compact as a large, sturdy lunch box certainly won’t bother anyone. If you’re looking for something even smaller: the aptly named Palmer “Pocket Amp” is an amp in effects pedal format with a headphone output and speaker simulation. If in doubt, there is even room for it in on the overflowing desk in your den – right next to the scale model Porsche.

For complete information about the Palmer Eins, go to:
http://www.palmer-germany.com/mi/en/EINS-Full-Tube-Guitar-Amplifier-1W-PEINS.htm