By now, the manufacturer from the Hessian town of Neu-Anspach is not only a familiar name in Germany, but also warms the hearts of guitarists internationally with nearly everything one could wish for to ensure a trouble-free, successful performance. Their product range runs the gamut from effects pedals and various problem solvers for a host of applications to professional guitar amplifiers and cabinets. The company entered three products in our signal splitter test marathon, and we want to turn our attention to the largest of them first. 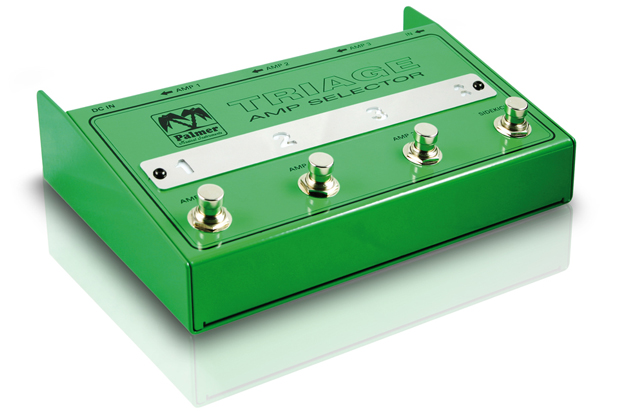 The Triage splits one guitar signal to three amplifiers. If you have already done experiments of this kind, you have also almost certainly experienced the imponderables that can crop up in a project of this kind. We are curious to see how cleanly the Triage distributes the tone and how it deals with noise such as the dreaded hum.

Housing/Look
The Triage comes in sheet steel housing that is painted green and measures 205 x 135 x 50 mm (W x D x H). It is no lightweight, tipping the scales at a heft 1.2 kg. Together with its teammate, the Triline, that means it tops the list in this test – at least as far as weight is concerned. But we know that Palmer does not assemble it products from hot air. Instead, the housings bearing the palm tree logo all use high-quality components that probably also tend to weigh a little more. The design of the splitter is highly transparent. The top contains the necessary switches, and the connections are on the front panel. The Triage has three sequentially numbered outputs. For each output, there is a switch that uses optical couplers – allowing a completely noise free switching without noticeable signal dropouts. For each switch, there is an LED that illuminates the corresponding output number when that output is activated and is very helpful, especially on dimly lit stages. This keeps you from accidentally selecting the clean amp when the time comes to unleash a hailstorm of rock or the high-gain sound at the start of an emotion-laden ballad. 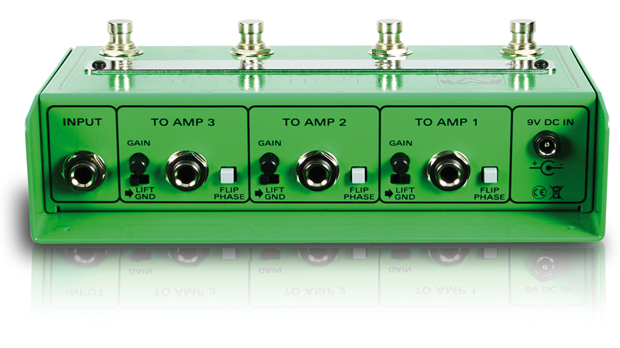 The outputs themselves are isolated from one another with transformers and each has a ground lift and a phase reverse switch, both of which are positioned next to the corresponding connector jack. The same goes for the small gain potentiometers, which can be used for fine adjustment of the corresponding output signal. The twelve o’clock position is neutral. You can incite your amp a little by turning the knob a little further, which gives you a sort of mini-boost function up to a maximum of 12 dB. Regrettably, the control positions are hard to see. A white marker would be very helpful, since you have to go mainly according to feeling on dark stages. The power connector accepts a 9V adapter with at least 120 mA. The internal voltage, however, is stepped up to 35V in the interest of improved sound quality and dynamics.

By design, the bottom and sides of the housing protrude, which provides very good protection for the connectors and plugs. In addition, the unit can also be fastened to a pedal board using the two holes provided here. 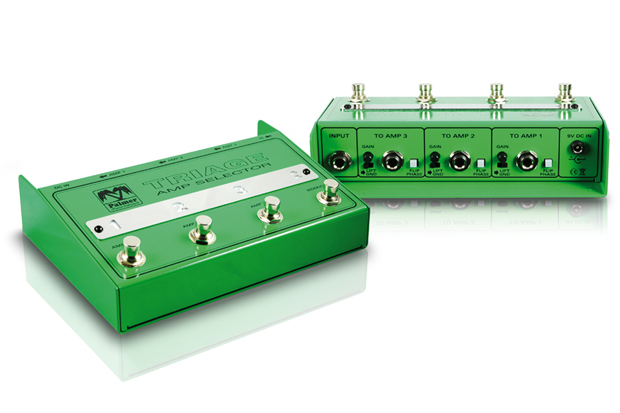 Operation
The Triage can be operated in two different modes, which the manufacturer calls exclusive and “sidekick” mode. The switch at the far right (Sidekick) toggles between the two operating modes. The exclusive mode, which, by the way, is always selected when unit is first turned on, could also be called the “or” mode. It switches between the individual outputs, whereby only the active output is heard and the other two remain mute. This all happens without delay and with absolutely no noise; the next amp is there right away. In sidekick mode, the amps are toggled on and off by the individual switches and can be heard simultaneously. This permits all combinations from one to three amps.

Praxis
I started out with an audio fidelity test. To this end, first I recorded the direct signal, i.e., the guitar plugged straight into the amp, as an audio reference. Next I placed the Triage in-between them and recorded each individual output. The gain controls on the Triage were at twelve o’clock. 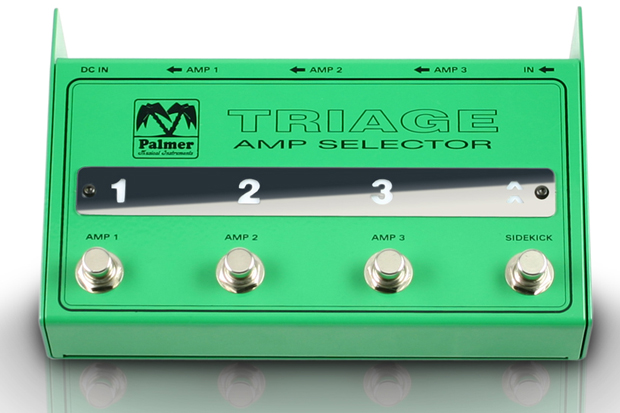 Conclusion
While the Palmer Triage may not exactly be a bargain when it comes to signal splitters/switches, it is well worth the money. It scores points for exemplary workmanship, in which all three outputs are electrically isolated from one another, which substantially reduces the risk of ground loop hum. If it should still occur, a ground lift and a phase reversal switch on each output ensure quiet. The Triage has two operating modes. In exclusive mode, only one amp is active at a time. In sidekick mode, all combinations of from one to three amps simultaneously are possible. It does colour the tone slightly in comparison with the direct signal. The low mids are somewhat thinner and there is a slight treble boost – but all within tolerable limits. If you are on the lookout for an absolutely reliable and hum-free splitter for up to three amps, you should definitely give the Palmer Triage a try.

Contra
Position of the gain control is hard to see