The little yellow Palmer Daccapo box lets you send your previously recorded tracks to a guitar amplifier in order to re-record them. Our Palmer Daccapo test report on delamar is all about how well the reamping box works and whether it is worth it for you to buy one. 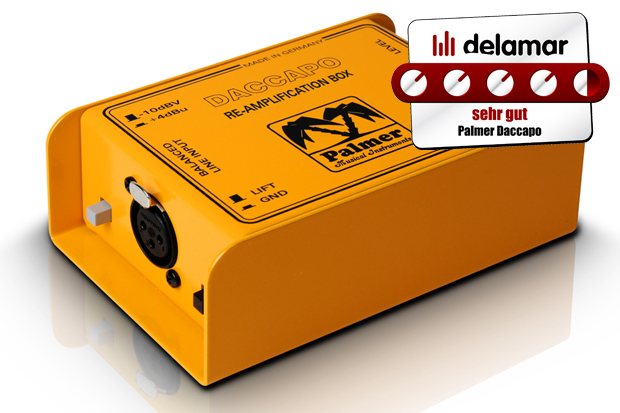 In order to record audio signals with maximum sound quality, the input and instrument output impedances must match. It is exactly this kind of impedance matching which the passive Palmer Daccapo hardware offers for your home recording studio. In this case, passive means that no power supply or battery is required for operation. This box lets you match any existing audio signal in your computer to the impedance of a guitar (or bass) in order to send it to a guitar amp or another device with a high impedance input. 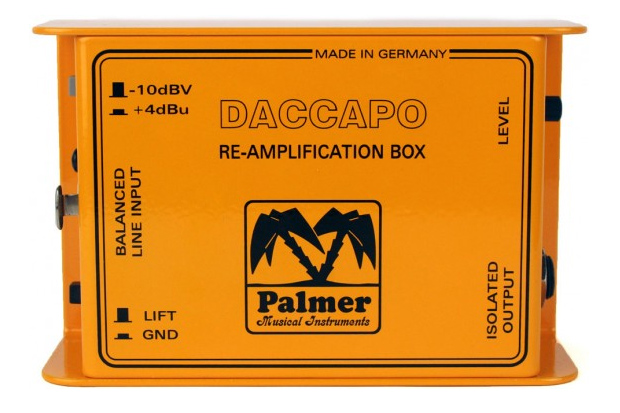 Why the Palmer Daccapo?
If you record a guitar track and later find that you no longer like it or it is difficult to blend into the final mix, there are various things you can do about it. One possibility is to just record a new guitar track. This is not only a nuisance, but sometimes it is also simply no longer possible – for example, if the band has long since packed up its equipment.

If you had the foresight to lay down a clean parallel track with a DI box while recording, however, then you are in luck. With the clean recording, you can either use guitar software or, if that doesn’t satisfy your sound requirements, use real reamping and send the signal to a guitar amp and then re-record it with a microphone.

This is exactly where the little Palmer Daccapo comes into play, because it is intended to handle all of the conceivable problems that can arise when doing this. It converts the impedance of the recordings in the audio computer into a high impedance signal with which you can record with the amp again without trouble.

The yellow Palmer Daccapo box, which measures 125 x 80 x 45 millimetres, is roughly the same size as the effects pedals from Ibanez or Boss, but has a larger base. The top is not only marked with the manufacturer’s logo and the model name, but also with labels for all of the elements, so that they are clearly readable from above without even having to touch the box. Sweet.

On the left side (as seen from above) is a balanced Neutrik XLR chassis connector that is fastened firmly to the case with screws and is also lockable to prevent the connected cable from slipping out accidentally. This connector is the input via which you feed in the audio signals. Next to it on the left is a grey pushbutton switch with which you can select whether the connected signal has a signal level of +4 dBu (typical in recording studios) or -10 dBV (consumer equipment).

To the right of the connector is an additional pushbutton switch for the ground lift. The case contains an isolating transformer that already ensures electrical isolation of the input and output. With the two of these together, you can reliably eliminate any ground loops that result from sending the signal through two amplification units.

Finally, on the opposite side of the Palmer Daccapo is the unbalanced output, which takes the usual form of a 6.3 mm TRS socket. This socket is also firmly connected to the case with a collar, so it can also be expected to last for a long time.

Next to it is a small knob that you can use to adjust the volume of the unbalanced audio signal. This potentiometer may be very small indeed with a diameter of approx. half a centimetre, but it is still easy to use. Plus it is probably not as susceptible to rough handling as larger ones.

On the whole, the workmanship of the hardware is very good, even if the details don’t quite reach the level of competitor Radial. The underside of the box with its four screws, which scratched up the top of my studio table, are especially noticeable. While the package does contain four adhesive rubber feet, the competitor’s solution with a three-millimetre layer of foam rubber on the underside is more elegant – and comes already installed. The trade off, of course, is that it also costs substantially more.

For the tests, I recorded several tracks using the Palmer Daccapo Reamping Box. It is very easy to connect. The output of the audio interface is connected to the input of the box and set to the correct level (in our case, +4 dBu). On the other end, the output is connected to the guitar amplifier using a cable that is as short as possible. Balanced audio signals like the one that comes out of the audio interface are less susceptible to noise than the unbalanced signal that comes out of a guitar or the yellow box.

For comparison, I recorded three tracks in order to gain an impression of the sound and the functionality. You will find the audio files described below in the Media Player.

The first track is the original, which was recorded with a Gibson Les Paul sent straight to the audio interface The second example is the reamping recording described above with the Palmer Daccapo. The signal chain consisted of an MXR Wylde Overdrive, a Reussenzehn power amp with EL34 tubes, and a nineties-era Marshall 1960A. The recordings were made with a Shure SM57. The same signal chain was used for the third recording. For this recording, however, the reamping was handled by our Avid Eleven Rack, which also offers this function, instead of the yellow box. Finally, the fourth recording is the one most suitable for a direct comparison of the audio signal before and after the box. Here I used reamping to send the signal back to the guitar input of the audio interface again.

In comparison with the original signal, the processed signal has a little less punch. Even in a direct comparison, however, this really isn’t very noticeable. Ultimately, I’m unable to determine which components (box, cable, audio interface) are responsible for the difference in tone. In any case, it is clear that the recordings made with the Palmer Daccapo sound very good and above all clean, which is especially noticeable in comparison with the Eleven Rack.

Protruding screws on the bottom

For a current street price of 79.00 Euros, with the Palmer Daccapo, you get a very well made and rugged box for reamping guitar recordings. All of the switches and connectors appear to be of high quality and the connectors are screwed firmly onto the housing. You don’t have to worry about this hardware breaking down sometime in harsh everyday use.

The manufacturer holds true to its promises where functionality and sound are concerned. The tracks I recorded with the little yellow box speak for themselves. There is no background noise, any ground loops are easy to eliminate, and matching of professional and computer levels means that the device also works perfectly with entry-level audio interfaces.

There is only on small detail worthy of criticism: The four sharp-edged screws on the bottom of the housing could have been avoided. It probably would have been sufficient if the feet had already been installed. All the same, maybe Palmer will reconsider using a surface-friendly layer of foam rubber.

If you want to use reamping in your recording studio, you won’t go wrong with this hardware. Thus the Palmer Daccapo earns four-and-a-half out of five possible points in this test. Well done.

At a glance
“This little yellow box enables you to send audio signals from your audio interface to a guitar amplifier.”