Two great alternatives to booster pedals, each with a dual function so you can get a greater output than that offered by more standard booster pedals 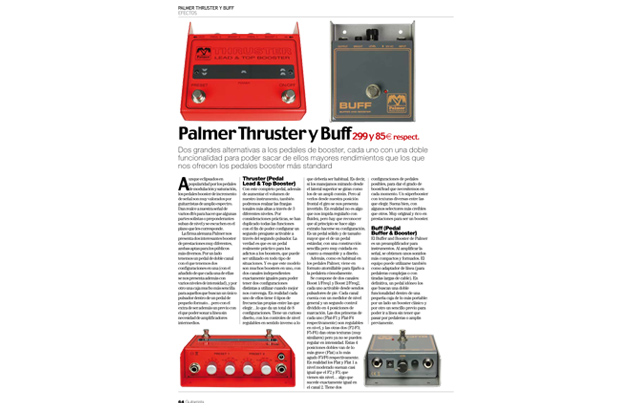 Although eclipsed in popularity by modulation and saturation pedals, signal-amplifying booster pedals are really valued by a wide range of guitarists. They enhance our signal by several dBs so that some solos or dominant parts are amplified and can be heard at the appropriate level. The German company Palmer is offering two interesting boosters with very different features, both suitable for very different audiences. On the one hand, we have a dual-channel pedal that has two settings in one (with the added bonus that each of them offers us even more with various levels of intensity), and, on the other hand, a box that is much more sensitive for those who want a single foot switch within a small pedal… but with the extra of also being a preamp, which can be used as a line out without the need for intermediate amplifiers.

Thruster (pedal lead & top booster)
With this all-round pedal, in addition to boosting the volume of our instrument, we can also boost the highest frequencies with three different levels. To make the application more practical, all the functions have been duplicated so that you can adjust a second preset setting which you can activate with a second foot switch. The truth is that it is a really practical pedal for people addicted to boosters, which can be used in all types of situations, and this model is several boosters in one, with two independent channels that are exactly the same, so that we can have two different settings to use when it suits us. In reality, each has four of its own frequencies to choose from… giving a total of eight settings. 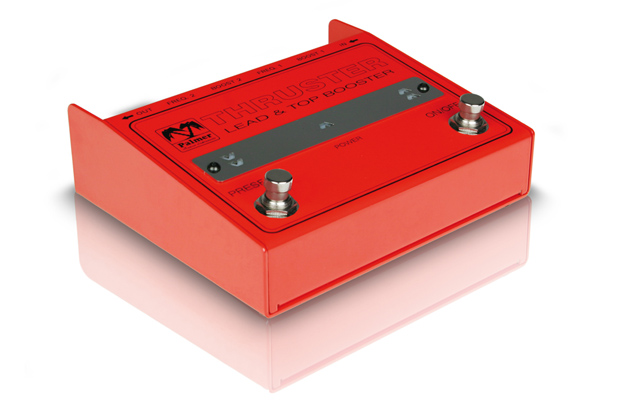 It has a strange design, with the adjustable level controls being the opposite way round to how they normally are. That is to say, if we use them while looking from the upper side, they rotate like the controls of a normal amplifier, but if we look at them from the front, they seem inverted. In reality, this does not stop us adjusting smoothly, but you have to remember that, initially, it seems strange adjusting the settings. The solid pedal is bigger than standard pedals with a simple but very neat build in terms of assembly and design. As is customary for Palmer pedals, it also comes in a screw format so it can be mounted easily onto the pedal board. It consists of two channels: Boost 1/Freq1 and Boost 2/Freq2, each one activated by separate foot switches.

Each channel has a general level gauge and a second control divided into four switching positions. The first two of each channel (Flat-F1 and Flat-F4 respectively) adjust the level, and the other two (F2-F3 and F5-F6) give other textures (very similar), but intensity cannot be adjusted. These four double positions range from the lowest (Flat) to the highest F3/F6 respectively. In reality, Flat and Flat 1 at a moderate level sound almost the same as F2 and F3, which do not have a level. Exactly the same occurs with channel 2. It has two possible pedal settings to give the level of boost/lead that we need at all times. A super booster with different textures to choose from. It sounds good with some selectors more credible than others. Very original with a lot of features for a booster.

Buff (pedal buffer & booster)
The buffer and booster from Palmer is a preamplifier for instruments. By amplifying the signal, we can obtain more compact and formed sounds. The device can also be used as a line adapter (for complex pedal boards or those with long cables). In short, an ideal pedal for anyone looking for dual functions within a small portable box: on the one hand, a classic booster and, on the other hand, a simple preamp to be able line out without having to go through pedal boards or amplifiers beforehand. 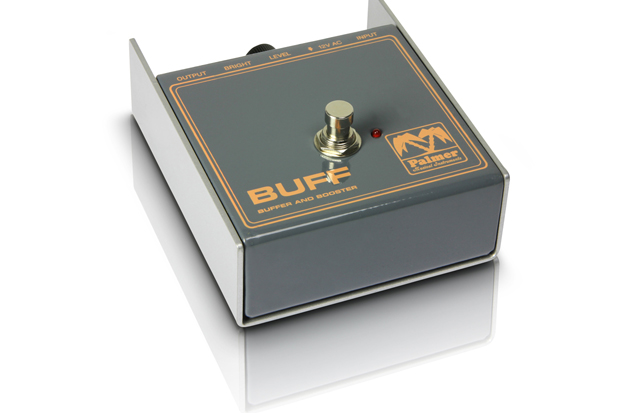 It is a somewhat smaller and simpler pedal than the previous one. It just has a bright switch, which is fairly smooth, but in this case that is good as it has just the right degree needed. There is also a general volume control with a wide range, probably more than is necessary… but it is appreciated, as we can adjust without being limited to different intensities, type of guitar, level of effects etc. Also in screw format. This is a simpler pedal that does not affect the signal at all; a booster that doesn’t show off, but that is ideal if we just want to give the right amount of boost to our solos or dominant parts without further complications. The Thruster is not bad at all, but it is one of the smallest and most versatile boosters that we have tried: we really recommend it.

Conclusion
Two very distinct booster pedals: one with a dual channel for two levels or two possible settings (especially when we have solo parts at different levels of prominence) and the other, a small box with a single channel, which we think is great as a preamp or an enhancing booster. Both are attractive due to their dual features and both give a very dynamic tone that is not at all artificial (especially the Buff and on some of the Thruster’s settings). They seem to be very solid and are very different in size.

We like:
That they are not typical boosters with one single function, and the spot-on design with its screw format

We don’t like:
Although it is a dual-channel pedal, the price of the Thruster is rather high

Guitarrista says:
Two great alternatives within the vast range of signal-enhancing pedals for those looking for quality in formats that differ from the usual