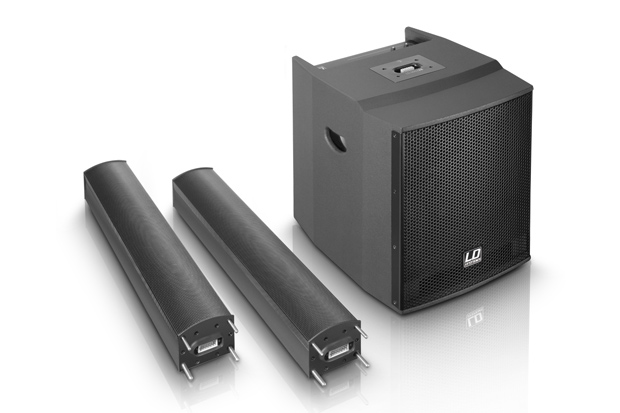 Everything is becoming more compact and modular, and, ideally, what we want is optimum results with a minimum of fuss, right? Smartphones with one-knob logic, browsers with single-button autocomplete, hot-swappable computer peripherals, and a car with Tiptronic instead of a gas pedal and a clutch switch. Plug and play was yesterday, today everything happens at the press of a button! Nearly everything – for the LD Systems MAUI 28 still has to be plugged together first – but then it all runs like clockwork.

Somehow, it all started back then with Bose – an ominous column and subwoofer, and you’ve got a modern sound reinforcement concept. While initially sniggered at by many, in conjunction with new knowledge in the field of line arrays, this very quickly developed into a new category of sound reinforcement systems – the column systems. Over time, the technology was refined and more and more electronics were introduced.
Today we’re dealing with a brand new representative of this area – so brand new, that we are able to present the test system to you well before the market launch. If you want to hear it live, you’ll unfortunately have to wait until mid-August; if you can’t bear to wait until then, just keep reading!

In terms of material, we are dealing with classic multiplex; this material is used in the system’s subwoofer. Evidencing high-quality workmanship with a stylish design and covered with solid textured paint, the subwoofer of the LD Systems MAUI 28 system houses two eight-inch speakers in a “V” configuration. The subwoofer also includes a connector panel with power amps behind it; in this regard, the MAUI 28 is no different than many other conventional systems.

But then why try to reinvent the wheel anyway – this arrangement has stood the test of time. The configuration of the drivers in the subwoofer, on the other hand, is much more interesting. Because of the “V”-shaped configuration of the speakers, the drivers enclose a defined volume of air in front of themselves, which is moved accordingly by the displacement of the membranes. The hope is that such designs will improve coupling of the acoustic waves with the surroundings, since – unlike in an ordinary speaker cabinet – it is not necessary to excite the total air volume directly. Instead, the defined volume constitutes a buffer that can be calculated, thus enabling developers to tune the cabinet more precisely. Regarded in terms of physics, this is similar to a band pass – and this variant of the bass speaker has also already proven itself. One additional benefit: Because less space is required for the baffle board, the cabinet is even more manageable in size. While we are on the subject of manageability, commendably, our test system came with a practical castor board and a protective cover. Exactly as it should!

So let’s take a second look at the column – or, more accurately, the columns, because the top of a MAUI 28 system consists of two parts

So let’s take a second look at the column – or, more accurately, the columns, because the top of a MAUI 28 system consists of two parts.
The lower module houses a total of eight of the sixteen three-inch speakers behind a protective grille in the slimline aluminium profile. The upper part of the column contains an additional 8 3-inch speakers and a tweeter driver with a horn. At first glance, both elements look identical, but there is still no risk of confusion during setup. Both parts of the column are clearly marked with Roman numbers on the back. What’s more: The components dock with one another via a multipin plug-in connector.

Using electronic logic, the power amp module in the bass cabinet detects whether the two parts of the column are plugged together properly. The “Locked” LED does not light up until everything is connected properly, and only then does the protective circuit switch the column on electrically. The mechanical connection between the column elements and the subwoofer is effected by four solid steel pins that ensure secure positioning and tidy plug-together assembly. Thus it all looks like a very convincing engineering solution. Theory is always second-best to practice; we put it to the test.

It actually all works very well, only the mechanical connection between the column components and the subwoofer is a little stubborn at first. No reasons to complain, however. I assume that these are teething troubles which will probably be worked out in due time. In any event, the connection is secure and sturdy and the system really does respond with silence to a purposeful attempt to connect the components incorrectly.

If – again on purpose – the two parts of the column are plugged together imperfectly, this is greeted by silence from the entire column. In this case as well, the logic does what it is intended to do. Before we delve into the background and the answer to the question “Why is that so important?”, there is another plus factor that is worth noting: The column is tall enough that the tweeter is positioned well above ear level for the average Central European. That is the way it should be. In PA applications, you want the high-range sounds emanating primarily from above – to ensure that the guests at the back of room can hear well, too.

The developers of the MAUI system came up with an interesting trick for optimizing the radiation characteristics of the column.

As you can read in more detail in our info box about cylindrical waves, the length of the column speakers and the spacing of the individual drivers play an important role in line arrays of this type. Moreover, it takes more membrane area to reproduce low frequencies than it does to reproduce high ones. In simplified terms, this means that the higher the frequency in the midrange, the less the 3-inch speakers of the MAUI 28 system are really needed. Consequently, the developers at LD Systems also divided up the working ranges of the columns into separate areas.
All drivers are used in the lower ranges, with fewer and fewer tweeters in operation as the range moves upward. This facilitates the ideal compromise between the necessary length of the speaker column, the necessary membrane area, and the maximum possible relative spacing between the drivers in use. Of course, this admittedly sounds pretty complicated, and it has to work in practice as well, meaning that the time has come to size up the LD Systems MAUI 28 in terms of sound. Let’s have a listen.

We set up the system outside in the courtyard, loaded up some recorded tracks, and started our listening session.

This much up front: the first impression is a good one. Not a trace of the usual PA horn sound, but clean and rich mids instead. The treble response, too, is pleasant and very crisp despite the comparatively tiny horn. The underlying bass rumbles discretely, but with presence, and fits into the overall acoustic picture. Voices sound pleasantly full and powerful. So we turn it up a little louder – and, while approaching the LD Systems MAUI 28 column, discover one small peculiarity. The sound that is such a pleasantly homogenous blend of bass, mids, and treble at a slight distance collapses a little right in front of the system. While difficult to describe, it sounds as if the previously smooth coupling between mids and tweeter no longer functions so seamlessly.

Sometimes there is something missing, sometimes it’s all there, and sometimes it’s too much. A few centimetres make the difference. Take one step backwards, and everything is good again. Take another two steps back, and it’s golden. By the way, this also holds true at high volume levels, and they are nothing to sniff at. The compact column packs an impressive aural punch and sounds a lot bigger than it really is. The 120-degree radiation angles are maintained very cleanly, for there are no outliers to be found in the frequency response curve. The consistency of the sound, which is already very pleasant at low volumes, is preserved even at much higher volumes.

» The system dispenses with fans; the convection cooling system is clearly sufficient.«

Logically, as the input level increases, the system not only produces more volume, but also noticeable heat at the generously dimensioned cooling element on the rear.

Not to worry – it becomes noticeably hot, but not unduly so. The system dispenses with fans; the convection cooling system is still clearly sufficient. Regrettably, the makers also dispensed with somewhat better protection for the cooling elements. These protrude markedly at the top of the connector panel and hold some degree of risk of injury. Proper setup of the column system and compliance with the safety recommendations, however, reduce the risk of injury.

The outstanding limiters thwart users who get carried away already with the input level, thus maintaining normal conditions. By the way – except for a master volume knob and a bass control knob, the MAUI system offers no other controls.

The LD Systems Maui 28 system offers the user a lot of freedom without bothersome cables. This compact plug and play solution is suitable for all conceivable applications. Whether for practice room or concert sound reinforcement and DJ applications, as well as for presentations, the LD Systems Maui 28 needn’t shy any comparisons in terms of sound and looks. Onstage, the column ensures equally good sound for musicians and audience alike. Thus the column is equally usable on stage for both PA and monitoring applications.

» This compact plug and play solution is suitable for all conceivable applications.«

Thanks to the practical plug-together modules, complicated, wiring is no longer require – after all, in a manner of speaking, the tweeters are sitting right on top of the subwoofers. Thanks to the all-in-one system, the LD Systems Maui 28 also manages without a stand. The balanced sound penetrates every corner of the venue – a 120-degree radiation angle pays off handsomely. This new concept from LD Systems sounds very promising indeed.

In order to hear the sound for yourself during the market launch, I can only recommend that you visit your favourite music store and try out the Maui 28 as soon as it is available.

Will the MAUI 28 system rock your world?

With an output of 2 x 200 watts and a maximum sound pressure level of 115 decibels, the MAUI 28 certainly isn’t a loud system, but the slender column with the active bass below it still packs a mighty punch. When compared with conventional sound reinforcement systems in terms of output and membrane area, our test system is in roughly the same league as a 10-inch mid/high unit with corresponding amping and a compact subwoofer, even if the MAUI 28 can’t quite keep up with other systems in this category when it comes to maximum sound pressure level.

For that, our test specimen offers a couple of completely different, but significant advantages – namely, its stylish appearance, broad and smooth radiation characteristics, and, last but not least, the transport bonus. If small and sophisticated is what you want or need, then an acoustic gig with a single column is easily imaginable. Definitely an eye-catcher in a small setting.

Compact, yet astoundingly powerful
No cables or stands to deal with
Very wide dispersion