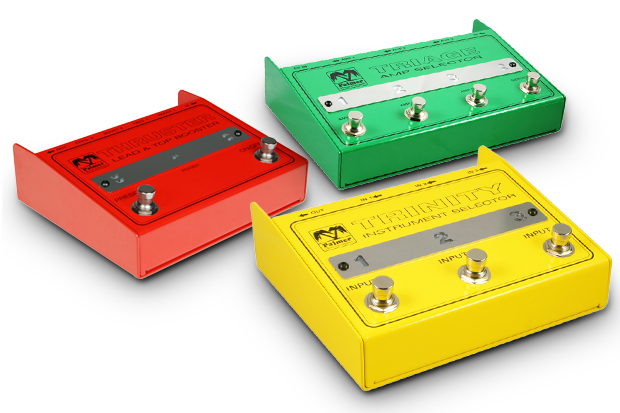 From time to time, Palmer provides guitarists with special little helpers. Things that aren’t available just anywhere, e.g., switch modules that make it possible to use two speaker cabinets with one amp. This time there are two switchers and a boost pedal to test.

Many years ago, Palmer even used to build tube amps. Then they turned their attention to analogue 19″ studio and stage gear. In the process, they created two products that are still enduring classics today – the PDI-03 (with load box) and PDI-05 (stereo, without load box) speaker simulators. The first model was rereleased some time ago and is still in the catalogue. The ADIG-LB and ADIG-ST are updated offshoots. It would appear that the southern Germany company is not enamoured of frenzied product changes. The amp and cabinet switchers which we tested back in 2001 are also still in production.

Of course, our test candidates are among the development department’s latest achievements.

Construction The electronics are enclosed in a very sturdy steel plate housing. There are two holes in the protruding base plate that permit fast, trouble-free mounting of the pedals on the FX board. The footswitches attached to the top are merely mechanical elements that exert pressure on switches with spring arms inside. Even these are not the active switching elements, but merely control an electronic module that performs the switching via optocouplers. Palmer chose this solution because, in their opinion, this makes it possible to attain sound-neutral functionality while avoiding the noise caused by conventional hard bypass switches. Large, brightly illuminated indicator fields show the status of the switching functions.

The devices are powered by 9V DC power adapters. This voltage is stepped up internally, which increases signal processing quality. Of course, all components are soldered on circuit boards. Massive jack connectors with a mechanically stable screwed connection to the housing, as well as a tightly gripping power input socket, high-quality potentiometers, extremely tidy wiring (in part using plug connectors) – all in all, material and workmanship are rock solid. Incidentally, Palmer assumes that users will generally already own a suitable power adapter. That is why none is included. However, one is available if required.

Triage In principle, A/B or A/B/C boxes that send an input signal to one of two or three outputs are dime-a-dozen standard products. In the simplest version, switching is handled passively and directly by electromechanical switches. Try routing a signal to multiple amplifiers in this way, though, and you will usually be confronted by a vexing problem: low-frequency background noise caused by multiple ground connections, commonly referred to as ground loop hum. Eliminating this requires so-called isolating transformers. They interrupt the ohmic contact to ground. But as you probably already suspect, when Palmer takes on a project like this, they go all out. Half-baked solutions are not an option. So the Triage has a dedicated isolating transformer in each of the three routing paths.

Moreover, you can also deactivate the ground lift separately in each section – i.e., reconnect the ground if necessary (bright crackling noises) – and use a pushbutton to reverse the phase in order to avoid corresponding problems when using two or three amps in parallel (thin sound due to cancellations). On top of this, a trim potentiometer permits a level boost of approx. 12 dB max., equivalent to four times the original level. The potentiometers are at unity gain in the middle position. This means that you can make the signal not only louder, but also quieter. The input impedance is 1 Mohm and the output impedance is 1kohm, thus permitting long cable runs.

The footswitch on the right, marked “Sidekick”, changes the mode of operation. In a second level (Sidekick-On), instead of alternating activation of the inputs, you can also activate them simultaneously in parallel with one another. To return to normal mode from here, press Sidekick again. Alternative switching, however, only resumes the next time one of the routing switches is pressed. So no fancy footwork is required to switch amps just in time for the next part, which is exactly how it should be.

Trinity This pedal does the exact opposite of the Triage: It lets you selectively switch three inputs to one output. The only additional function is a gain potentiometer for each section, again with a boost of up to +12 dB. This time, the potentiometer is at unity gain when it is turned all the way to the left. In addition to the three inputs and the main output, the Trinity also has a tuner output. Hold down one of three footswitches for a while, and the pedal switches to mute status: now you can tune silently. A little tip on the side: the tuner output can also be used as a second output, effectively giving you the functionality of an A/B box as well.

To prevent the electronics from (possibly) adulterating your sound, the output is purposely a high-impedance output. Thus in a manner of speaking, the electronic conditions for the amplifier are the same as if an instrument with passive coil pickups was plugged straight into the amp. The 1 Mohm input impedance of the Trinity is non-critical and corresponds to the standard for amplifier inputs.

Thruster According to the subtitle in the name, this is a “lead & top booster”. Oh, a distortion pedal? Sorry, wrong answer, this is a different kind of “boost”. The Thruster contains two selectively activatable tone control modules which make it possible to highlight lead passages and/or high frequencies (top boost). This is what the name means. Each section has a boost/gain control and a four-position rotary switch, marked “Preset”, for selecting various modes:

Praxis Let’s stick with the Thruster for a moment. A small level boost is also assured when the presets are activated, even if the boost potentiometer is set to minimum in flat position. Reproduction is extremely clean, very low in noise, and thus fundamentally, at first neutral. The fact the sound (passive pickups) seems to have more presence is attributable to the buffering effect of the circuit and/or the low impedance output of the Thruster. As far as the flat boost is concerned, the benefits of the pedal are obvious: One has two different level boosts available, with which, for example, one can increase the intensity of distortion in conjunction with a tube amp. On the clean level, the Thruster can be used to provide additional (master) volume levels on demand. Using one of the two presets as a frequency boost lets you nudge a vintage amp into overdrive with more finesse. The level boost is gentler on the whole, but the frequency response peaks have a lasting effect on tone colour. What is familiar from the Rangemaster as excessive treble boost, the Thruster accomplishes variably in several ranges. So on the pedal board, for example, you can also coax more extreme distorted sounds out of a distortion pedal or, downstream in the signal path, reshape the tone as with a mixing desk EQ. In any case, the Thruster proves to be an extremely efficient tool which, thanks to its outstanding electronics, does its job correctly even in high-impedance insert loops.

Evaluating the other two router pedals comes down primarily to two questions: 1. Does the tone change? 2. How much background noise is created? That can be resolved very quickly. The sound quality is outstanding; basically, the signal is identical to the original signal. In addition, the Triage shines with absolutely silent switching. Even with an amp set to extremely high gain, no appreciable background noise is produced: mission accomplished! With the Trinity, this is different under the same conditions. You can indeed hear (still subdued) crackling in the lead channel of an amp that is turned way up. But this situation is only a strictly theoretical starting point and not in line with the intended use. You connect up to three instruments to the Trinity, which you are certainly not going to swap just when the amp is kicking into high gear. Simply speaking, this means that the Trinity also passes the test functionally with flying colours.

Summary Palmer’s little helpers prove to be tools with an exceedingly high standard of quality. Thanks to sophisticated electronics, they do their job without negatively influencing signal quality. The useful features ensure high utility value. The Triage is especially impressive in terms of functionality, because it is perfectly equipped for controlling multiple amps. In view of the high, costly technical outlay involved, it is certainly OK in terms of price vs. performance. The same holds true for the Trinity and the Thruster, which is one of a kind on the market at the moment. Conclusion: absolutely recommendable.

More information about the products tested can be found here.