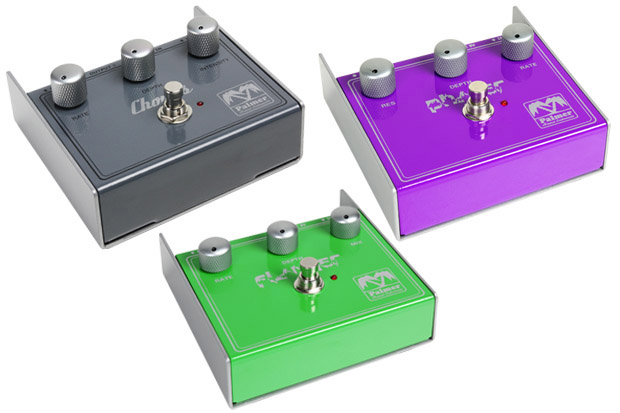 The stock in trade of audio and guitar tools expert Palmer is normally dependable solutions for those day-to-day problems that arise live or in the studio. But the German manufacturer’s world does not consist only of splitters, switchers, and DI boxes. The company recently began releasing its own series of effects pedals, consisting of several distortion boxes and three modulation effects.

Palmer’s new floor effects unite German engineering know-how in design and the quality of domestically made components with the price-shrinking advantage of assembly in China. The effects come in incredibly sturdy housings; the massive dome-type speed knobs and the switches underscore their ruggedness.

The heaviness of the pedals results from the protruding additional bit of steel chassis, which has holes permitting fast attachment to an effects board with screws. The pedal is only 9.5 cm wide if you prefer a different method of fastening it to your board. The edges of the housing are pleasantly rounded so that they do not pose a risk of injury. The effects run on 9V battery power or with an optional power adapter. The battery compartment is a model of accessibility. It simply snaps open and folds out, and is permanently connected to the plastic housing. This makes it practically impossible to lose the battery compartment cover. The in and out connectors are also firmly affixed to the housing. The overall impression is one of very high-quality workmanship – these effects appear to have been built for the ages.

The chorus is the only effect in our triumvirate with three connectors, one input and two outputs, making it possible to output a stereo signal. Since this also requires two amps, however, in most cases, one will probably use the mono signal from Output 1. A red LED shows that the device is on. Like the other two pedals, the Perchor has a true bypass. In this mode, the signal remains absolutely unaffected. Three knobs share the clearly organized top panel. Rate controls the speed, Depth controls the strength of modulation, and Intensity increases the proportion of effect signal relative to the dry signal. We started out with all knobs in the middle position. The chorus signal sounds soft and silky, but also relatively restrained. So we went ahead and used the continuously variable Intensity control to add more effect to the mix. The chorus signal sounds clear and pleasant, without extreme fluctuations. The tone is ample and thick and enjoyably natural at the same time. Turning all of the knobs up all the way still produces a pleasant, relatively fast, jangly chorus effect. The Pechor simply refuses to surrender to exaggerated modulation, the sound always remains pleasant.

Unlike the chorus, which works mainly by doubling the signal, the flanger works mainly by changing the timbre. The Pefla is every bit as easy to use as the Pechor. Rate controls the speed, Depth again controls the strength, and Intensity controls the amount of effect signal added to the dry signal. If you switch on the pedal with all of the controls in the middle position, a classic flange signal with a slight delay results. In this case as well, the initial impression is rather soft and reserved. Unlike the chorus, however, the tonal parameters make it possible to obtain much more extreme sounds. The sound is clear and transparent; the superimposition of the two signals sounds a little like a wah-wah pedal. Turning the Depth and Mix up all the way with a relatively low speed results in a tone so unsettlingly threatening that it sounds nearly like a singing machine.

The sound of Palmer’s phaser is determined by three controls. Resonance controls the amount of the modulated output signal that is returned to the input again. This time, Depth denotes the strength of the phase shift and Rate controls the speed. This permits some pretty big time fluctuations. Turning the Rate knob all the way to the left results in an oscillation time of a whopping 15 seconds; turned all the way to the right, it stutters like a fast tremolo. Here it is the same satiny, transparent basic character that predominates. The unit does this very cleanly, without especially affecting the guitar signal. The phaser permits even more extreme settings with long phase shifts. If necessary, however, it can also conjure up Leslie-type tones, which permits a broad palette of various floating sounds.

Palmer’s three stomp boxes are a success. What all have in common is a solid housing with elegant features such as direct fixation to a pedalboard and the perfectly accessible battery compartment. The pedals are child’s play to use and deliver fine, smooth sounds with a flair without influencing the basic sound too much. The spectrum of the chorus is rather reserved, while that of the flanger hits the golden mean – and that of the phaser is nearly boisterous.

All information about the products can be found at: