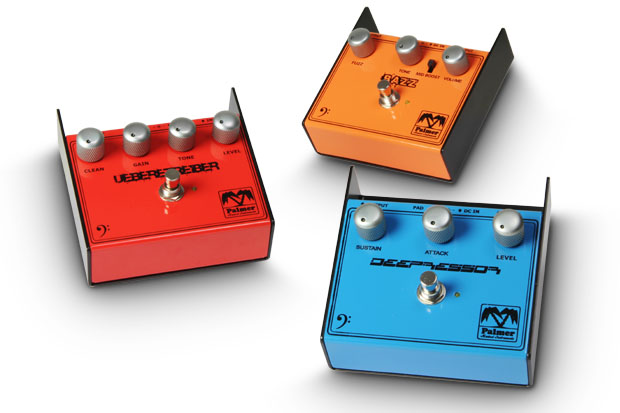 If I have sound problems while playing bass live or in the studio or I am working out how to integrate certain effects or eliminate some hum, sooner or later, I always turn to Palmer. This German company offers a wide range of what, casually speaking, could be referred to as “sound helpers”.

These run the gamut from headphone amps, splitters/mixers, power adapters for effects pedals and much more to guitar effects and guitar amps. This puts the manufacturer, whose products are distributed in Germany through Adam Hall, on a broad footing. Here I find all of the little electronic helpers that simplify my life as a musician. Recently, the company began also making bass effects, of which there are three for now.

Because I know that Palmer products rise to the highest international standard in terms of quality, I had very great expectations of the trio. Even if the three effects pedals in question are “only” from the Roots series, which is engineered in Germany, assembled in China, and very affordably priced:

If it says “Palmer” outside, it must have “Palmer” inside. It’s that simple! My initial impression is a thoroughly positive one. The three effects with the meaningful names “Deepressor” (compressor), “Uebertreiber” (distortion), and “Bazz” (fuzz) have plain but extremely robust housings made of 2.3 mm steel plating. The bottom is covered overall with rugged rubber; there are only small cut-outs for the screws and the battery compartment. The latter, by the way, has an easy-to-open cover that permits very quick battery replacement.

Because the effects have a power consumption of only 12 mA, a 9V battery will last for around forty hours. For regular use, it is advisable to power them with a power adapter. All three pedals feature true bypass, meaning that when the effect is off, the signal goes straight to the output socket without the sound being influenced. This is highly unusual for effects pedals in this price class and just goes to show once again that the developers at Palmer “tailor” their gear for us musicians.

The layout is clear and the colour choices are exceedingly unequivocal and strong, enabling me to tell the pedals apart easily even on dark stages. The switches and knobs seem sturdy. There is a little LED just to the right of the switch which indicates whether the pedal is on or off. The sole disadvantage of the clear layout is the ease with which the potentiometers turn: Even the slightest touch is enough to change the positions of the knobs and thus change the configured sound. The side with the outputs is interesting: the protruding base of the housing protects the connections well against impacts and the like. Moreover, there are two small holes in the plate which I can use to screw the pedal down to my effects board with no trouble. What a great idea. The stomp boxes are mounted securely, but can be removed again quickly if necessary.

Inner values The inner values of the Palmer effects are also impressive. The analogue layout of the three stomp boxes is on small circuit boards that are fastened to the sockets. The footswitch is not attached to any of this, so even the most brutal stomp cannot damage important circuitry. The potentiometers are connected to the circuit boards by cables. All contacts are insulated with shrink tubing. Now that is what I call a well thought-out layout! In this area, too, the Palmer effects earn a grade of “A+”. Apparently, no “designers” were employed in the development of the three stomp boxes, because the surface and the look are very plain … which in my opinion is a very good thing, since there is nothing to distract from their functionality. The only design element other than the name is the manufacturer’s logo – two small palm trees on the lower right – and a small bass clef. With their wordplay in selecting the names of the three effects pedals, the developers struck a good balance between musical reference and humour.

It takes some chutzpah to call a distortion pedal the “Uebertreiber” [the “Exaggerator” or, more literally, the “Over-Driver”] (Model Name PEBUT). So let me start with this little bright red pedal. There are four knobs on the top: Clean, Gain, Tone und Level. The markings and functions are clear. Only the function of the Clean knob was a little unclear to me at first, but that sorted itself out as soon as I hooked up the pedal. It controls the mix of the dry and overdriven signals. Otherwise, no user manual is required with the Uebertreiber. Gain controls the level of distortion, Tone controls the tone, and Level adjusts the output volume. The pad switch between the input and out connectors is for adapting the signal of a bass with active electronics. (All three effects have this pad switch for using active and passive basses.) As far as the sound is concerned: this is one “exaggerator” that lives up to its name.

It delivers an impressive amount of distortion. However, I can also use it as a simple booster for the bass signal, because the sound is amplified without changing it. The Tone control has only a marginal effect on the sound. The level of distortion ranges from a simple signal level boost to a totally distorted bass sound. Thanks to the Clean knob, however, the bass signal is never lacking in clarity, definition, and punch even with maximum distortion. Friendly blue Okay, time for our next candidate, the „Deepressor“ (Model Name PEBDP). As the name tries to express, this is not a gadget for promoting major depressions, but a bass compressor instead. Fortunately, it is a friendly blue colour (blue is widely known to have a pleasantly calming effect) and, like its red sister, has a very clear layout. Equipped with just three knobs and the necessary footswitch on top, the Deepressor’s mission is to compress the bass signal and, if desired, add distortion. It accomplishes this mission with aplomb. Also without changing the sound, it makes my signal meatier and adds some subtle distortion. Notes that are played too loudly are reduced to the set level, while notes that are too quiet are boosted. In general, I am not a fan of compressors because, in my opinion, they are too detrimental to my playing dynamics. Nevertheless, the Palmer Deepressor does its job very well. The third and final specimen in my little test factory is the “Bazz” (Model Name PEBAZ). Unlike the other two stomp boxes, the Bazz is an almost nondescript bright orange. There are just three knobs on top, whereby the Bazz also has a mid-boost switch. In all other respects, it is like its two predecessors in this test. Only the sound is not. Unlike the Uebertreiber, the Bazz emphasizes distortion with timbre modulation. The sound gets darker, grittier and more tube-like. Neutrality is not its thing. The Bazz has definite direction in mind for my bass signal: tube amp! Despite the slight attenuation of the highs and high mids and the low-mid and bass boost, the Bazz enriches my sound instead of adulterating it. My sound doesn’t lose punch and definition. On the contrary, the tone becomes warmer and rounder, the bite of my Schwalbe Juices bass recedes and makes room for a rich, slightly distorted bass sound that commands attention. The Bazz can, however, also be mean. If I turn the Fuzz control past the 12 o’clock position, the tone gets nastier and the distortion really begins to take over.

What I wrote about the other two Palmer Roots pedals, however, also holds true for the Bazz: These are clearly effects for bassists, because the sound is specially engineered for the bass frequencies and is powerful without becoming muddy or adulterating the original tone. Summary A working bassist can’t go wrong with the three pedals from Palmer. If you are in the market for a well-conceived, good sounding distortion pedal that also has true bypass, you must hear these triplets. The Bazz is my personal favourite, but the two others are also outstanding examples of distortion pedals. Definitely try them!