This all-round valve combo shows that DI-expert Palmer also knows its way around real flesh and blood amplifier sounds. We mainly know Palmer for its speaker simulators, with Joe Bonamassa being their most famous user. Less well known is the fact that at the beginning of the 1980’s they produced guitar amplifiers. After along absence, last year Palmer launched a new amplifier onto the market, the FAT 50, available as a separate head and a combo. We tested the latest version. 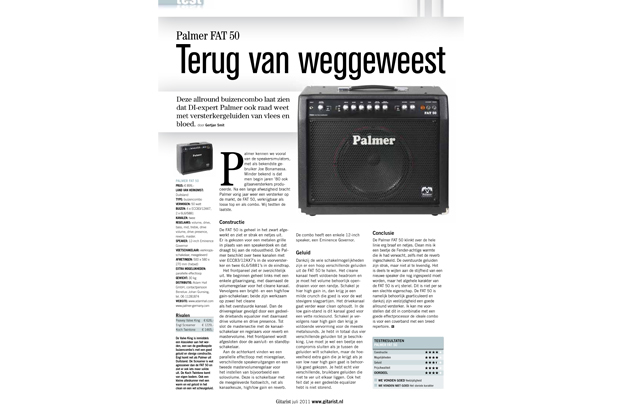 Construction
The FAT 50 is finished entirely in black and has a very clean and neat appearance. A metal grill has been selected instead of speaker cloth and that contributes to the robustness. The Palmer has two channels with four ECC83/12AX7’s in the pre-amp and two 6L6/5881’s in the power stage.

The front panel looks very clear. We begin at the far left with a single guitar input, with the volume control for the clean channel alongside it. Then there is a bright and a high/low gain-switch; both work on the clean channel as well as the overdriven channel. Then there is the drive control followed by a shared three band equaliser with drive volume and drive presence next to it. Finally the master section with the channel switch and controls for reverb and master volume. The front panel is completed by the on/off and standby switches. On the rear there is a parallel effects loop with mix control, various speaker outputs and a second master volume control to set a solo volume for example. This is switchable using the supplied footswitch, as is channel selection, high/low gain and reverb. The combo has a single 12-inch speaker, an Eminence Governor. 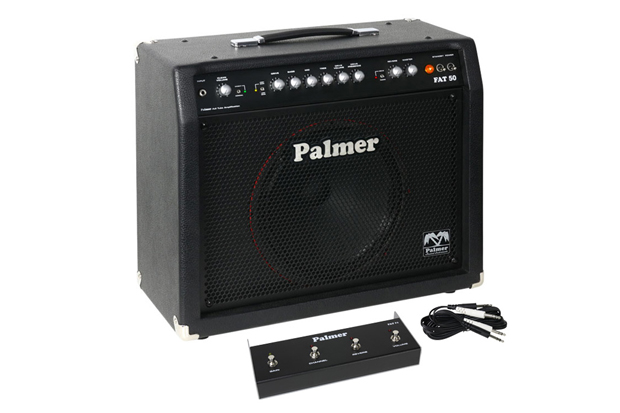 Sound
Thanks to the many switching options a heap of different sounds are available from the FAT 50. The clean channel has sufficient headroom and you need to crank up the volume quite high to get an edge. If you switch in the high gain, you get a mild crunch which is good for slightly heavier licks. The drive channel goes further where clean leaves off. In the low gain position this channel is good for a fat rock sound. If you then switch to high gain you get enough distortion for most metal sounds. You therefore have four different sounds at your disposal. Live there is a slight compromise if you want to switch between the sounds, but the quantity of extra gain that you get when you go from low to high gain is suitably well-selected. In reality you have four different, usable sounds which do not sit too far apart from each other. Even the fact that you have a shared equaliser is not disruptive. 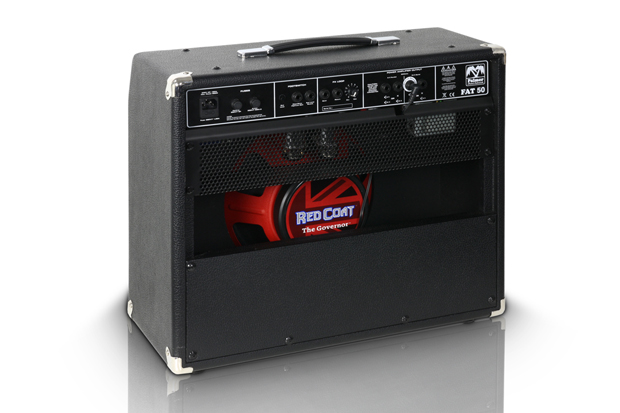 Conclusion
The Palmer FAT 50 sounds very neat and tidy across the whole range. On clean I miss the Fender-esque warmth that I had expected a little, even with the reverb switched on. The overdriven sounds are strong, but not too lively. It is partly attributable to the stiffness of a new speaker which is yet to be broken in, but the overall character of the FAT 50 is quite sterile. This is not a poor characteristic per se. Which is to say that the FAT 50 is well-articulated and due to its versatility it is a god all-round amplifier. I can imagine that in combination with a good effects processor, this is the ideal amplifier for use in a covers band with a wide repertoire. 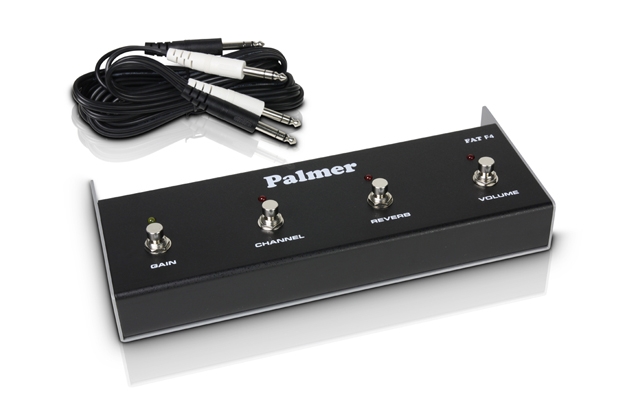 For more information go to:
http://www.palmer-germany.com/mi/en/Products/Guitar-Amplifiers/Tube-Guitar-Combo-50-W-PFAT50.htm