Speaker Simulators from Palmer – Everything you need to know

Keith Richards “couldn’t say no to the thing”, which quickly found its way into the rigs of such fantastic guitarists as Eddie Van Halen or Joe Bonamassa following its debut in 1989 and can be heard on countless songs. The “thing” is the Palmer Speaker Simulator, which was soon assigned the product designation PDI-03 and enjoys an almost legendary reputation today. It is equally at home in the studio or on stage and is the “mother” of all Palmer tools for processing amplifier signals. 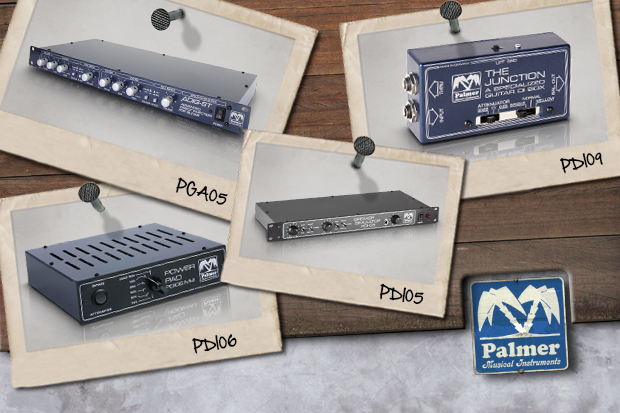 The purpose of a speaker simulation is to obtain a sound that is consistent anytime, anywhere and is not influenced by crosstalk from other instruments or room acoustics. In this connection, it is possible to use the power stage overdrive that contributes so much to a “good sound” while avoiding trouble with excessive volume, even when using high-powered tube amps that do not have a master volume control.

As the name suggests, a speaker simulator imitates a loudspeaker. Above all, guitar speakers are important because of their function and sound: they constitute a load that is required for tube amplifiers and convert their electrical output signal into sounds. Because linear reproduction of the guitar signal doesn’t sound particularly exciting, guitar speakers are tailored to their special application. Their frequency response with its peaks and valleys resembles an alpine panorama and extends only from around 70Hz to 5kHz. Of course, it follows from this that a speaker simulator should emulate this characteristic sound and the load function as precisely as possible.

A differentiation is often made between “American” and “British” guitar tones. These labels refer for one thing to the two “major” amplifier manufacturers; other brands are seldom taken into account. This mostly also has to do with the power stage tube configuration, which has a major influence on the sound especially in overdrive. In this regard, the “American” 6V& and 6L6 tubes are frequently compared with the European EL84 and EL34 types. Ultimately, it is the characteristic of the speaker that is meant, even if in broad generalisations. The “British” sound really describes just one brand, while, on the “American” side, numerous manufacturers are lumped together. But does the green model sound “more British” than the purple one? Does the Italian replica with an alnico magnet maybe sound even “more American” than a US original with a ceramic magnet? In general, it can be said that “American” speakers usually have a smoother frequency response than “British” ones, which tend to emphasize the high-mid and treble frequencies. Thus in conjunction with the amplifier and the power stage tubes, countless variations in tone are possible. Open-backed cabinets or 4×12 stacks and half-stacks also make a difference.

The PDI-03 Speaker Simulator has a switchable tone filter for variable reproduction of the typical frequency response of guitar speakers and the cabinet characteristics. The DEEP and FLAT presets let you select the powerful bass of a closed 4×12 cabinet or the balanced, breezy reproduction of an open combo amp. A second bank of filters includes a MELLOW setting for a bluesy “American” tone. The NORMAL position produces the typical high-mid bite associated with “British” speakers. BRIGHT introduces an additional treble boost that is especially suitable for “funky” clean sounds and aggressive distorted lines. The PDI-05 has the same switching possibilities for each of its two channels.

The Junction  PDI-09 is a special DI box that is placed between the amplifier and speaker and is a substitute for micing. It filters the frequency response of the amplifier signal and converts it to line level. A slide switch sets the speaker characteristic to MELLOW, NORMAL or BRIGHT.

In the PGA-04 and PGA-05 models, rotary controls assume the function of the preset switches for continuous adjustment of treble and bass. Similarly to the DEEP/FLAT switch of the PDI-03, there is a switch with a BROWN position which selects a dark reproduction with emphasis on the mid-range and a LITE position with an open and transparent sound. This version of the simulation is more modern and is especially suitable for hi-gain and metal sounds. For especially aggressive sounds, the unfiltered amplifier signal can be added with and without treble attenuation.

For safe operation, tube amplifiers always require a load on their output, and normally the speaker fulfils this function. It is driven by the output voltage of the speaker and set in vibration so that the sound waves are heard as tones.

For safe operation of a tube amplifier without a speaker, a substitute load, the so-called “dummy load”, must be connected. Suitable dummy loads can include both frequency-independent and frequency-dependent (= linear and non-linear) loads, which are also called “ohmic” and “reactive” loads respectively and convert the output power of the amplifier into heat. Now actual speakers constitute a reactive load. Their electrical resistance is called impedance and is stated in ohms. The value is only nominal, because the impedance is frequency-dependent and varies greatly across the reproduction range of the speaker. For example, an 8-ohm model may evidence values from approx. 6 to 100 ohms (for more about this, see below under “impedance matching”).

For optimum emulation of this complex impedance behaviour and operation of the amplifier without a speaker, the Palmer PDI-03 and PGA-04 speaker simulator models have a built-in reactive load that can handle a maximum of 100 watts.

The PDI-05 and PGA-05 stereo devices where originally developed for preamps that do not require a load. If the power stage behaviour is intended to flow into the situation as well, the PLB2X8 Dual Loadbox with two reactive loads is the ideal addition. It permits use of the PDI-05 and PGA-05 with preamp and power amp without speakers.

The PDI-06 Power Pad is mainly designed as a “power attenuator” and is placed between the amplifier and the speakers. This makes it possible to overdrive even the power stages of powerful amps; the high volume can be turned down to living room level at the power pad. The PDI-06 additionally offers a dummy load function, which, for example, permits “silent” operation of amps with frequency-corrected (Recording Out) outputs.

Of course, the PLB2X8 Dual Loadbox and the PDI-06 Power Pad can also be connected to the PDI-09 instead of a speaker, which can be used in this way as a speaker simulator for “silent” recording.

For optimum performance and safe operation, the output impedance of the amplifier and the speaker impedance should always match. With most amps, the impedance can be selected on the rear panel. Alternatively, many amps have multiple speaker sockets for the standard values of 4, 8, and 16 ohms. Only a few amplifiers have an output impedance of 2 ohms.

The power that an amplifier can deliver is measured by the nominal ohm rating of the speaker.  For example, if a 16-ohm speaker is connected to a transistor amp with a stated maximum output impedance of 4 ohms, the amplifier output will drop sharply, but there is no risk of damage. A load that is too low, on the other hand, can cause the transistors to overheat.

The situation is entirely different where tube amps are concerned: for design reasons, your output “expects” a specific load value. Without a speaker connected, this value is too high (missing load = infinitely high resistance), and the intended current cannot flow. The tube power amp attempts to compensate for this by increasing the voltage that “drives” the current (= the potential difference between the poles of the output socket). If this exceeds the insulation resistance of a component, a voltage flashover results, which typically leads to destruction of the component. The power tubes, power tube sockets, and output transformers are especially at risk. If the load impedance is less than the output impedance of the amplifier, then more current can flow than is intended. This is excessively hard on the power stage tubes and causes them to wear out quickly, but the risk of damage is lower in this case.

The Palmer PDI-03 and PGA-04 models with built-in dummy loads are available in 2, 4, 8, and 16-ohmversions and can handle loads of 100 watts. So there is an appropriate version for nearly all guitar amplifiers from vintage to modern.

The PLB2X8 Dual Loadbox with two 8-ohm loads can also be operated in mono at an impedance of 4 or 16 ohms, in which case the power handling capability is doubled to 200 watts.

Applications – which speaker simulator is the right one?

With various models, the Dual Loadbox, and the Power Pad, Palmer offers maximum flexibility when it comes to speaker simulation and the perfect solution for every situation. As a rule, all of the units are equally suitable for live use and recording.

Thanks to their built-in dummy load, the PDI-03 and PGA-04 are the ideal complete solution for combo amps and heads. If speakers are connected to the SPEAKER THRU sockets, then the internal load is automatically deactivated. So simultaneous micing is possible for comparison and mixing. In the PDI-03, the unfiltered amplifier signal is additionally sent to four LINE OUT sockets, where it can be used for running effects units, reamping, or processing with software, e.g., convolution with speaker impulse responses.

The PDI-05 and PGA-05 are especially suitable for stereo preamps and multieffects units. Of course, they can also be used with combinations of preamps and power amps. For live use in this manner, speakers are connected. In the studio, the speakers can be replaced by PLB2X8 Dual Loadbox for “silent” recording. Like the PDI-03 and the PGA-04, the two units differ with regard to the control capabilities and the tuning of the simulation: one provides a more “classic” vintage characteristic while the other embodies a more modern, more aggressive tone.

The PDI-09 Junction is equally flexible in use. Placed between the amplifier and the speaker, it delivers a simulated signal that is sent to the PA via the mixing board – making it an extremely practical alternative to micing. With the PLB2X8 Dual Loadbox or the PDI-06 Power Pad as a load on the THRU socket, the PDI-09 becomes a full-fledged speaker simulator. The PDI-06 Power Pad offers an especially interesting capability in this regard: with speakers connected, it makes it possible to run an amplifier full-out at any volume level and simultaneously pick up the amp via the PDI-09!

There is one more application that must be mentioned: those colourful floor effects can also be filtered with a Palmer speaker simulator and sent directly to a mixing board or recording device. For example, this makes overdrive, distortion, and amp-in-a-box pedals sound surprisingly authentic. With the PDI-09 and good monitor system, your favourite distortion pedal becomes a stage- and studio-worthy minimal setup.

Additional information about the products can be found at:
http://www.palmer-germany.com/mi/en/Speaker-Simulators.htm