The Palmer Triline – An ABY Splitter with Extras – Test Report by bonedo.de

We continue with the Trilline by Palmer. The name already betrays how it works, and if you take it literally, the device actually can split the guitar signal three ways. However, the Triline more properly belongs in the ABY category, since the third output is intended only for the tuner and also is not individually switchable. For that, however, the blue box incorporates a few clever and indeed useful special features, which we of course wanted to look at in more detail. 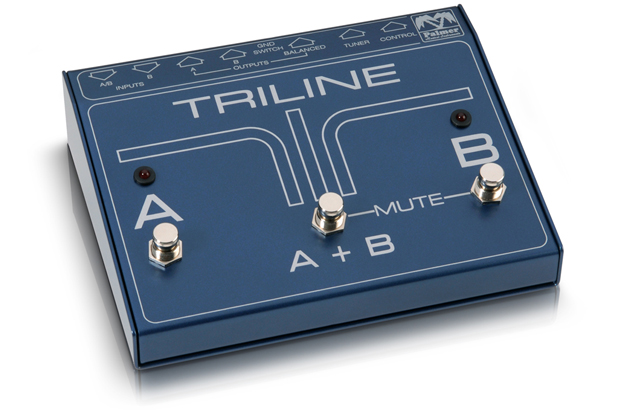 The Triline proves yet again that Palmer makes thoroughly roadworthy equipment. The blue-painted sheet steel housing is truly no lightweight at 1.2 kilos. Measuring a generous 190 x 150 x 50 mm (W x D x H), it also lays claim to a significant share of pedalboard real estate. Because the Triline doesn’t split or switch anything without power, the manufacturer also gave it a functional power supply with a screw-down connector and included a thick, four-metre long cable. So if you really are toying with the idea of mounting the splitter on your pedalboard, be aware that you must also contend with four long metres of cable in search of a home. The Triline is very clearly designed. There are three foot switches on the top.

The left one controls Output A, the right one controls Output B, and the middle one controls A and B simultaneously. The two outer switches each have an LED that indicates the status of the corresponding output. To reduce the risk of ground loop hum when two amplifiers are connected, outputs A and B are electrically isolated from one another by a transformer. If ground loop hum is encountered, there are three mini switches with which one can close or lift the various ground connections. Switch 1 connects the electronic earth to the housing, Switch 2 grounds Output B, and Switch 3 controls the grounding of Output A. This should make it possible to deal with all conceivable grounding problems.

Unlike other ABY switches, the Triline has two inputs (A/B, B). The first input (A/B) sends the signal to both outputs, A and B. This can be used, for example, to link a guitar with two amps via outputs A and B. There is a Tuner Out, a third output of sorts, for a tuner. However, this output is not switchable and is permanently connected to the signal. Input B is routed only to Output B, but for that, it has another trick up its sleeve: In addition to the TRS socket, it also has an XLR connector that offers a balanced signal. Precisely – it also has a built-in DI box, preferably for use with an acoustic guitar. Presto – the second potential configuration! Send the electric guitar to one amp and the acoustic guitar to the mixer via balanced out (or to an acoustic amp via the TRS output). If you frequently play both electric and acoustic guitar on stage, this is a good way to connect and route them both. What’s more, because the tuner is always available separately, both guitars can use it at any time.

On the rear panel, there is an additional socket labelled “Control Out”. This works only in conjunction with the Palmer E-Frog, which makes it possible to route two amps to one cabinet. The E-Frog needs the control signal from this output so that it always knows which amp must be connected to a resistive load.

Switching is absolutely logical and trouble-free with the Triline: The two outer switches A and B activate outputs A and B, while the middle switch (A+B) controls both simultaneously. Pressing the middle switch again reactivates the last individual output selected.

The features are flawless, and it goes without saying that the device is roadworthy. But what about the Triline’s tonal neutrality? Before we scrutinize this, however, there is another detail to report that is not apparent at first glance. The Triline uses two preamp stages, which naturally can puff up the signal a little. While the splitter is set to unity gain at the factory, it is possible to boost the output level by up to approx. 10 dB. If, for example, the acoustic guitar is a little weak or you want to drive the amp with a slightly hotter signal than usual, the whole can be adjusted accordingly. The associated potentiometers are accessible from the underside and can be adjusted with a small flat screwdriver. 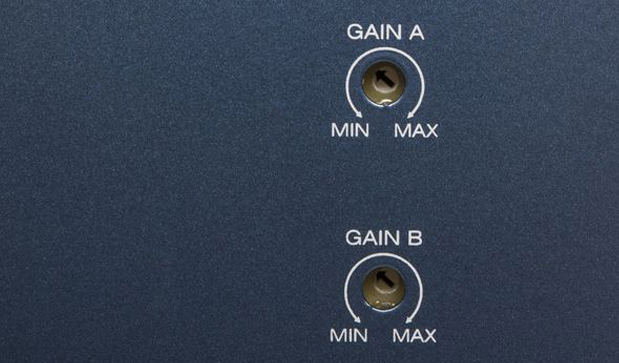 Of course, there is no place for this possibility in our tone fidelity test and it remains neutral. We are interested in the extent to which the tone changes when the Triline is in the signal chain between guitar and amp. To this end, first I recorded the direct signal, i.e., the guitar plugged straight into the amp. Then we put the Triline in the signal path and recorded outputs A and B and the tuner output as well, since in theory, it could also be used to drive a third amplifier. Granted, that is not really what it is intended for, but we still wanted to know what it sounds like.

Of course, there is no place for this possibility in our tone fidelity test and it remains neutral. We are interested in the extent to which the tone changes when the Triline is in the signal chain between guitar and amp. To this end, first I recorded the direct signal, i.e., the guitar plugged straight into the amp. Then we put the Triline in the signal path and recorded outputs A and B and the tuner output as well, since in theory, it could also be used to drive a third amplifier. Granted, that is not really what it is intended for, but we still wanted to know what it sounds like.

In comparison with the direct signal, the Triline causes a slight lower midrange attenuation; the sound isn’t quite as warm as before. There is also a slight treble boost. While this is on a microscopic scale, the point of this test is to listen very carefully. In the interest of fairness, it should be noted that losses of this type were encountered with nearly all of the splitters tested. Ultimately, it is up to the individual to decide the extent to which the inclusion of corresponding additional tools should be allowed to colour the basic tone.

The effect on the signal is a little stronger with the tuner output, so that I really wouldn’t use it to connect a third amp. However, this also is not recommended by the manufacturer. Thus it falls more under the category “curiosity” and of course does not affect our findings!

When it comes to the second discipline, combating ground loop hum, the Triline functions flawlessly. Thanks to the built-in electrical isolation of both outputs there are no problems, and in event that a problem should arise, the three ground lift switches mean you are fully equipped to deal with it. 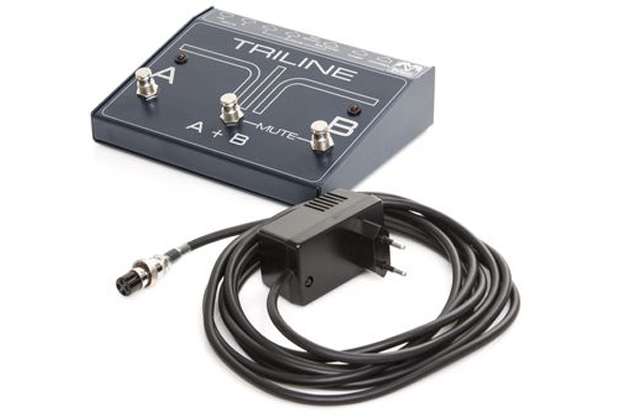 The Triline performs to our utmost satisfaction, without switching noises or signal glitches in any mode of operation. In addition to standard ABY switching, this dependable and roadworthy splitter also lets you use the built-in DI box and its balanced output to integrate an acoustic guitar. It can then be sent to the mixer, while the electric guitar connected to the other input is routed to the amp. This is very practical for guitarists who frequently switch back and forth between electric and acoustic guitar live. Thanks to the electrically isolated design of the two inputs, problems with ground loop hum will be rare indeed. Together with the three small ground lift switches, the likelihood of trouble is practically nil. The only aspect that may bother absolute tone purists a little is tonal fidelity. On a microscopic scale, the signal is slightly attenuated in the lower midrange and thus forfeits a little warmth. In the interest of fairness, however, it should be noted that this is a characteristic shared by many of the splitters that we tested.

The bottom line: The Triline may have a hefty price, but for that you get a professional tool that is equipped for all eventualities. 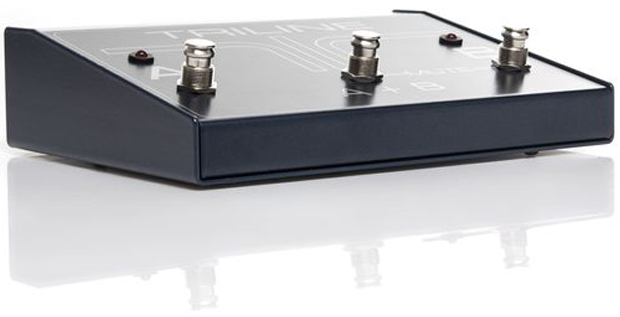 Contra
Price
Works only with the included power supply. No capability to power the Triline via a multi power supply on the pedalboard