Anyone whose studio monitors are sitting on the console or a desk is likely to be interested in isolation pads like the Adam Hall SPAD ECO2, with which it is supposedly possible to solve some of the resulting problems. Find out in our Adam Hall SPAD ECO2 test report whether the pads are a success and worth your money. 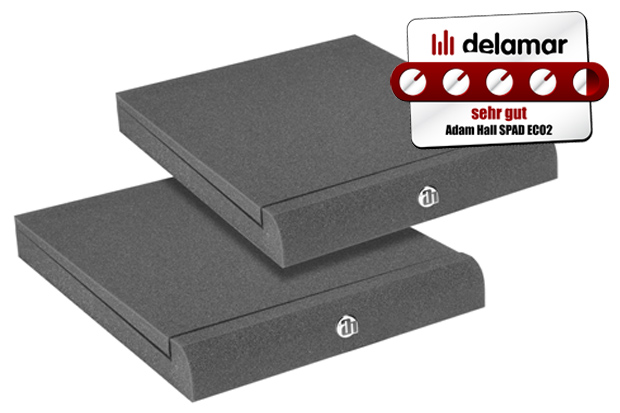 The Adam Hall SPAD ECO2 is an isolation pad used to isolate speakers or studio monitors acoustically. The foam pad is intended to avoid resonances with the surface on which the speaker sits, thus resulting in improved sound. The foam pads are designed to permit three different angles of inclination.

Whenever I unpack products made of foam, at first I am always a little wary of the anticipated smell. Why do foam products so frequently bring back memories of high school chemistry? It must have something to do with them being packed so soon after they are manufactured. In any case, this time I am very surprised that the Adam Hall SPAD ECO2 hardly smells at all and what little odour there is dissipates very quickly.

Each package contains two pads, which leaves me wondering why I ordered two packages. In any case, this turns out to have other advantages that I will touch on later. The two absorbers are made of high density acoustical foam, in other words, the kind of foam normally also found on walls as acoustical insulation. The colour is the typical charcoal grey, which will probably fit in with any monitor and studio furniture.

Based on the dimensions, these absorbers will easily work for speakers with 6.5-inch woofers. They hold the 8-inch KS Digital C8 speakers that we currently use as monitors with room to spare, likewise our Adam A7X speakers. The measurements stated by the manufacturer, by the way, are 265 x 330 x 40 millimetres (WxHxD).

Those who position their speakers lower can simply rotate both absorbers by 180°. In this case, the dispersion angle points upward.

As far as the workmanship of the Adam Hall SPAD ECO2 is concerned, there are certain variances in the four parts (two packages) that I had to test. All of the pads are at very good level, no question about that. Astoundingly, the outer edges are absolutely straight and both the wedge and the base sit perfectly on one another. Unfortunately, this is not the case with all of the world’s foam products, which is why it is worthy of mention. One edge on one of the two wedges is not cut absolutely cleanly, but this is not really noticeable, since the speaker sits on top of it anyway. Interestingly, the two pads from the first package were approximately four centimetres high, while the pads from the second package were both closer to 3.5 cm. This hardly plays a role, however, since the parts enclosed in each of the packages were roughly equal in height.

One detail has been solved exceedingly well with this model: The manufacturer’s logo is glued on dead-centre on the front. It is also facing the right way. While this is of no importance to me personally (I will probably even remove it completely), I have heard producers complain that these parts are not attached properly in cheap products. In any case, together with good workmanship, this is one indicator of the attention to detail that goes into production.

The question that many readers will be asking themselves now is whether these foam absorbers even have any effect when the studio monitors are positioned on them. The answer: of course they do.

When speakers are positioned directly on a desktop, for example, mechanical vibrations are transmitted to the desktop. First the diaphragm moves and transmits its vibrations to the speaker cabinet. In high-quality models, transmission to the cabinet is already minimised by the material and coupling systems. You will frequently notice more surface vibration in inexpensive studio monitors than with high-quality models.

The Adam Hall SPAD ECO2 does a good job of reliably isolating the speakers from the surface on which they stand, as you would expect with high density foam. If you have a little more money to spend, you may take a closer look at the more expensive models. These have an additional layer of foam rubber intended to keep the speakers even more firmly in place. The KS Digital C8, however, remains firmly in place even without the foam rubber.

For a street price of EUR 21.80, you get two functional isolation pads that look pleasantly inconspicuous under the speakers. They ensure that the speakers are acoustically isolated from the surface on which they stand. In most home recording studios, this will probably result in a significant improvement in sound by combating the transmission of vibrations.

It is especially praiseworthy that the foam parts had hardly any smell and what odour there was dissipated immediately. I wish I could say the same of all of the other foam products in this world. For me, this aspect alone would be worth the additional three or four Euros in price compared with other products.

On the whole, the Adam Hall SPAD ECO2 isolation pads deliver exactly what they promise at an affordable price. The only point of criticism is the poorly cut edge and the difference in height between the two packages.

It is always very difficult to rate accessories of this type, but given the aspects mentioned above, I give the Adam Hall SPAD ECO2 four and a half out of five possible points in this test report.

At a glance Adam Hall SPAD ECO2 Test Report “These foam pads ensure that the studio monitor is isolated from the surface on which it stands.”

Home recording studios that want to position their studio monitors on the desk.

For additional information, go to:
http://www.adamhall.com/en/Adam_Hall_Stands_PAD_ECO_Series_-__Monitor_Isolation_Pad_SPADECO2.html