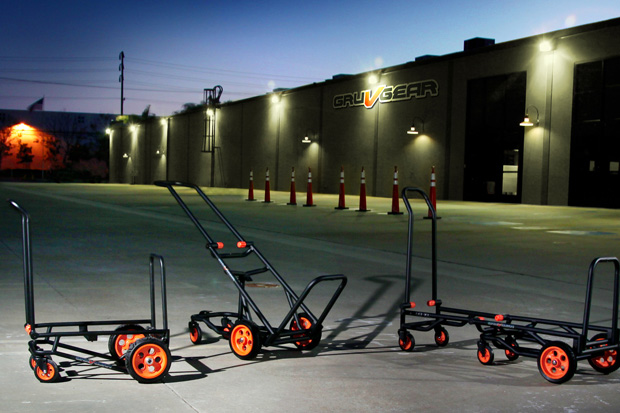 The stage is set and the spotlight is aimed at Gruv Gear as Germany-based distributor Adam Hall introduces the product line to the European market at the 2011 Musikmesse Frankfurt and Prolight + Sound international trade shows.

The two companies met a few months back at the 2011 Winter NAMM (National Association of Music Merchants) Show held in Anaheim, California, where a daily visit from Adam Hall’s Markus Jahnel reinforced the positive interest he expressed from day one. “We had overwhelming interest from dealers and distributors from all over the world.” recalls Jay Baldemor, President of Gruv Gear. “Markus definitely became one of the most familiar faces by the end of the show, and that says a lot about Adam Hall’s sincere desire and commitment in working with us.” Within the following weeks, product samples were expedited to Germany, and shortly after a formal agreement was signed.

Adam Hall’s massive footprint in Europe spans 30 countries at present, including throughout all of the European Union (EU) territory. The distribution deal effectively takes Gruv Gear’s reach farther than any single country’s distribution companies previously considered. Jay notes, “We talked to guys from Italy, Spain, the UK and others, but I’m thoroughly impressed with what Adam Hall puts on the table. They not only cover the Music Industry, which is a natural fit for us, but so many other industries that our products cross over to. We can’t wait until every stage, club, and arena in Europe become familiar venues where Gruv Gear products are seen.

It’s a huge blessing to be working with Adam Hall.” “For me it was love at first sight – I definitely see a great potential for the Gruv Gear V-Carts on the European Market. These products set a new standard in terms of transportation flexibility and their design and overall feel are absolutely unique. It’s a real ʻmust haveʼ.” says Markus Jahnel, Sales Manager at Adam Hall GmbH. The debut of Gruv Gear’s products, particularly its innovative series of multi-mode utility carts & trolleys for creative professionals, will be featured at Adam Hall’s booths at the two major trade fairs being held concurrently in Frankfurt on April 6-9, 2011.

All of Gruv Gear products can be found in the B2B Webshop at: http://www.adamhall.com/en/Gruv_Gear.htm