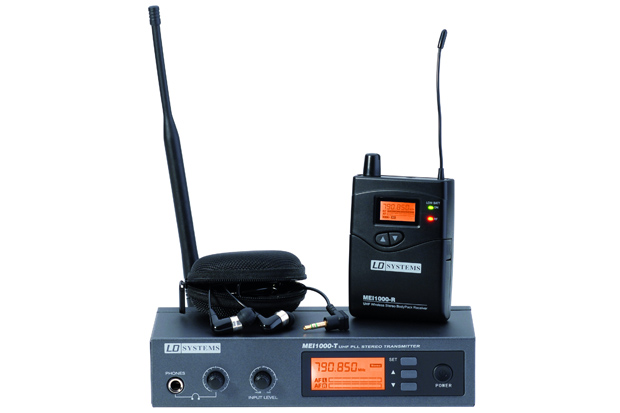 The LD Systems MEI1000 consists of a stationary transmitter, the portable in-ear receiver, and a pair of stereo ear buds. The stationary MEI1000-T transmitter has two XLR/6.3-mm combo sockets on the rear panel, permitting use of either connector standard. The transmitter can be installed in a 19″ rack using the included rack mounts. The transmitter operates within a frequency range of 790.850-813.800 MHz. Within this frequency band, it can be tuned to 160 different frequencies in 25-kHz increments. A 12-dB pad switch prevents overloading of the input stage of the transmitter if the audio level is too high.

The front panel of the transmitter contains the 6.3-mm stereo socket for the headphone connector as well as the volume control for the headphone signal. This makes it possible to listen to and check the monitor signal that is being sent from the mixing desk to the in-ear transmitter. An input level control is used to adjust the input sensitivity of the transmitter module. The input level of the monitor signal is shown by the AF indicator on the orange-coloured display. The abbreviation “AF” stands for audio frequency. In addition, the display indicates the transmission frequency in MHz and the transmission mode, which is switchable from stereo to mono. Sixteen channels are offered in each of the pre-set frequency groups (Group 1-10), so that a total of 160 transmission channels are made available to the system.

The MEI1000-R portable receiver is contained in a matt black plastic housing, which makes an extremely rugged but simultaneously exclusive impression. The flexible receiving antenna is permanently attached to the housing and, with a length of approx. 10 cm, is designed for optimal UHF band reception. The receiver is powered by ordinary AA batteries – battery insertion proved not to be a problem even for musicians who are technical novices. The included ear buds are connected to the receiver with a stereo miniplug. The loudness of the signal in the ear buds can be adjusted using a volume knob. The volume knob is also the on/off switch: Turning the knob all the way to the left past a detent position switches off the receiver.

The display of the portable receiver is highly legible and indicates not only the transmission frequency, but also – using a three-element battery symbol – the charge state of the battery. The RF meter indicates the received field strength of the radio signal; the AF meter indicates the audio level. The set button is used to call up various menu items, for example, the group channel setting or the equalizer function. When the equalizer is activated, the treble frequencies at 10kHz and above are boosted by 6 dB. Boosting the presence frequencies makes it possible to compensate for treble loss due to the transmission path. In addition, a hearing protection limiter can be activated that limits the signal level in the ear buds. For safety’s sake, this should always be on. The set button is hidden under the battery compartment cover, making it nearly impossible to press the button accidentally.

Two different modes of operation are selectable on the pocket receiver. The first is normal stereo mode, in which the stereo input signal is heard with the corresponding panorama separation. The second is called focus mode and enables the musician to control on his own the mix ratio between his own signal and that of the rest of the band. In this mode, the transmitter transmits two microphone signals that are reproduced at the same level in both ear buds. The mix ratio can be adjusted in 31 increments using the up/down buttons. This mode functions only if there is a mono signal on each of the input channels on the transmitter and the transmitter mode has been set to stereo. For musicians who have high standards when it comes to trouble-free monitoring, the MEI1000 in-ear system from LD Systems is a wonderful thing. Floor monitors often emphasize midrange frequencies and not only hold a high risk of feedback, but frequently also have a negative influence on the sound of the entire sound reinforcement system. The MEI1000 in-ear monitoring system minimises these problems. Moreover, it is easy and intuitive to use and proved to be absolutely fail-safe. The good legibility of the transmitter and receiver displays permits reliable use even in dim stage lighting. The sound of the receiver signal is very clear and brilliant. Activating the equalizer adds even more presence to the monitor signal. The focus mode is an especially useful tool for the singer, because it enables him to adjust the relative volume of the vocal and the band himself.

– Only one transmitter can be installed per 19‘‘ rack slot