It was Hessen’s largest event of 2017, with some fans even camping out the night before on the festival site. On July 19, Robbie Williams, one of the world’s greatest entertainers, stood on stage in the Commerzbank Arena in Frankfurt. His latest album and current tour share the name “The Heavy Entertainment Show”.

One of the two guitarists is Gary Nuttall, the longest-serving band member, who has been touring together with Robbie for more than 20 years. And since the beginning of the year, Gary has been using Palmer equipment in his rig: two TINO switchers and an 8 Ohm Palmer power attenuator. The idea for and the technical implementation of this solution came from Adam Birch, one of Robbie Williams’ large team of backstage technicians, who also looks after the sound for bassist Jeremy Meehan. 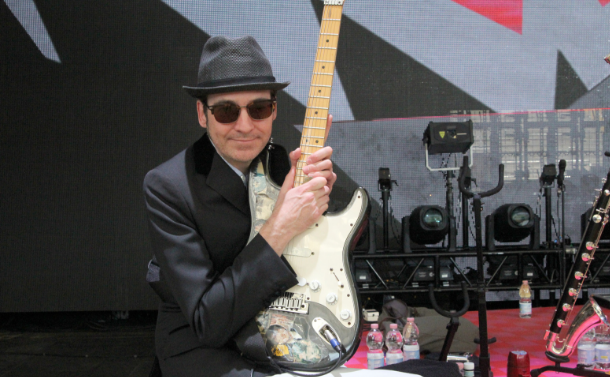 “I have used Palmer equipment a lot over the years because it is really well made and extremely reliable,” explains Englishman Adam in the interview. Reliability is essential, especially on a tour of this size with Robbie Williams. With 34 shows scheduled in several European countries between June and September, equipment failure or damage is not an option. 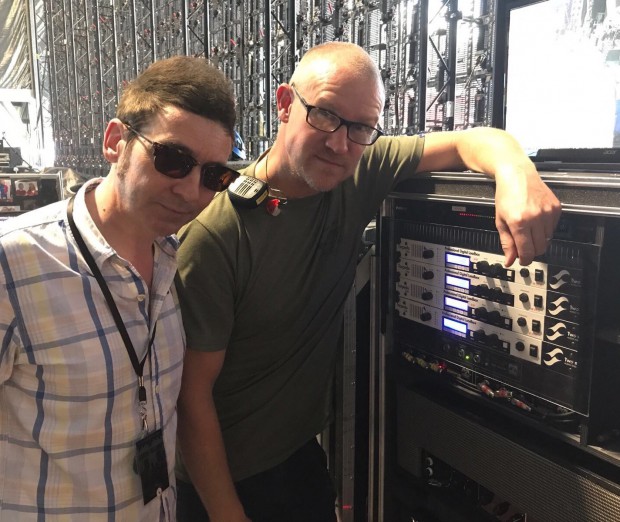 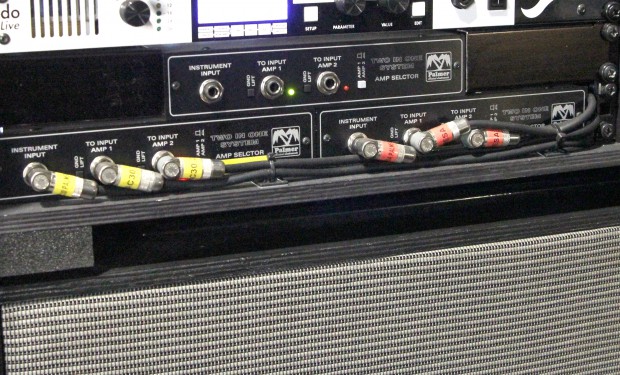 Uncluttered stage design
At the Frankfurt, Germany show, most of the equipment in the Commerzbank Arena is hidden behind the stage, unseen by the audience and obscured by a large video wall, which spans the full width of the stage. There the technicians have everything under control, as Adam explains. “The whole world is behind the big video wall,” as he elaborates on the complex world of backstage operations. This technical concept ensures an uncluttered stage design and creates space for the artists. In addition to the superstar and the large band, there are also backing singers and numerous dancers. Therefore, sacrifices had to be made, not least in the case of live guitar cabinets. Just two individual 4 x 12 speaker cabinets remain – stage-left and stage-right. One is for second guitarist Tom Longworth, so that he can control the feedback of his guitar, and the other features real signal-routing for Gary Nuttall. To create a diverse range of guitar sounds, Gary switches between two tube amps, a Mesa Boogie Dual Rectifier and a VOX AC 30. In this way he can achieve the full potential of each of the two very different sounding amplifiers. At this point, the Palmer TINO comes into play.

Palmer TINO: two tube amps into one speaker cabinet
The TINO switching solution enables the use of two amplifiers alternately through one cabinet. And these can be tube or transistor amps. It doesn’t matter! The two-channel amp selector routes the guitar signal to the desired amplifier, and to avoid unwanted interference, the unused amplifier is run in parallel and its input is “shorted” (as if the guitar’s volume pot was turned down). The built-in buffer converts the high-impedance guitar signal, making it less susceptible to interference. The guitar signal is switched and at the same time, the muted amplifier’s speaker output is connected to a dummy load. In this way, there is absolutely no risk of a no-load situation, which can be particularly dangerous for a tube amp. 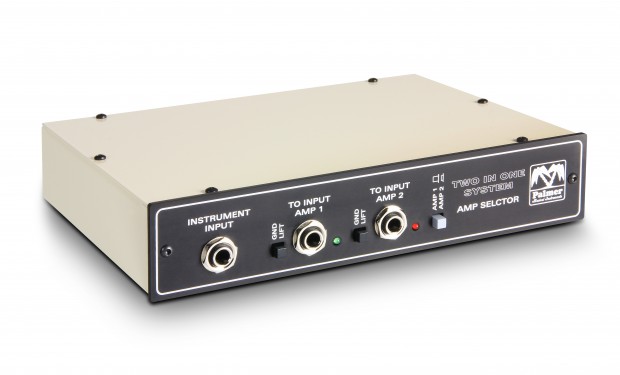 Palmer Load-Box: full saturation at low volume
So that Gary has a good “live feel” when playing on stage, a 4 x 12 cabinet positioned nearby projects his guitar signal. “So Gary at least feels a little air movement from the four speakers,” smiles Adam. Because high stage-volumes are a fundamental problem of live shows (especially if tube amps are driven into distortion), technician Adam has reduced the level of the signal coming from each of the guitar amps into the speaker cabinet with an 8 Ohm Palmer PDI06L08 power attenuator. Thus, a full and authentic sound is achieved at an acceptable volume level. The Palmer Load-Box is connected between the amplifier’s speaker output and the speaker cabinet. At full saturation, the volume of the amp can be reduced from 100 to 18 percent in six stages. A further stage mutes the speaker completely. The PDI06 then functions as a load-box and accepts the amplifier’s full output. For Gary’s amplifier, the Palmer attenuator is set to 70 percent. 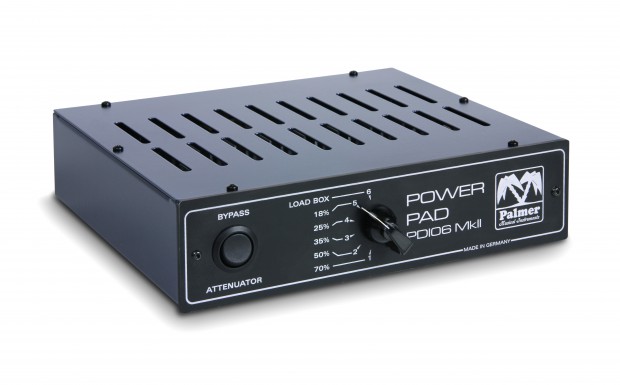 In contrast to the TINO, the PDI06L08 is somewhat concealed, built into the rear of the rack. “We don’t normally have to go in here,” says Adam confidently. “Once it is set, I can rely on the Palmer Load-Box.”

The tech is delighted to report, “Gary has had no complaints about his sound so far, which for me as a technician is a very good sign – for any equipment. Palmer has been doing an excellent job during the entire tour, because everything is working as it should and the guitar sound has remained consistent.”

Gary is also very happy with his current touring rig. He trusts both Adam and his personal technician Andy implicitly. Robbie Williams’ music combines a variety of musical styles together, requiring his long-serving musical companion to have an extremely flexible and adaptable playing style. But personally he prefers rock-and-roll, in the style of Elvis Presley or Chuck Berry.”

Incidentally, the entire touring system is duplicated, so that in the event of a failure, they can switch to another system. The Palmer equipment and the guitar amps are also duplicated. You cannot afford to do it any other way with a show of this kind, constantly on the road with a crew of more than 80 people. Even the big stage and all of its attendant equipment has been duplicated. As the fans cheer at one show in one city, the second stage may already be en route to the next venue or being assembled. Taking inspiration from Robbie Williams, this is indeed “The Heavy Entertainment Show”.

Palmer is a registered brand of the Adam Hall Group. 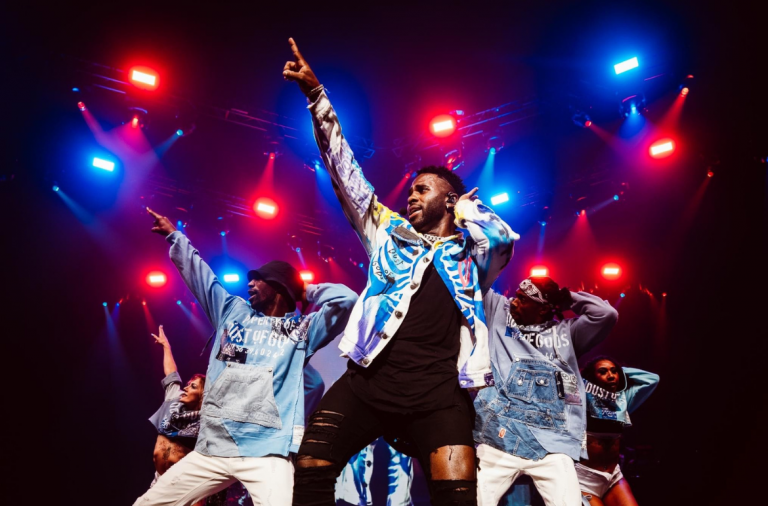 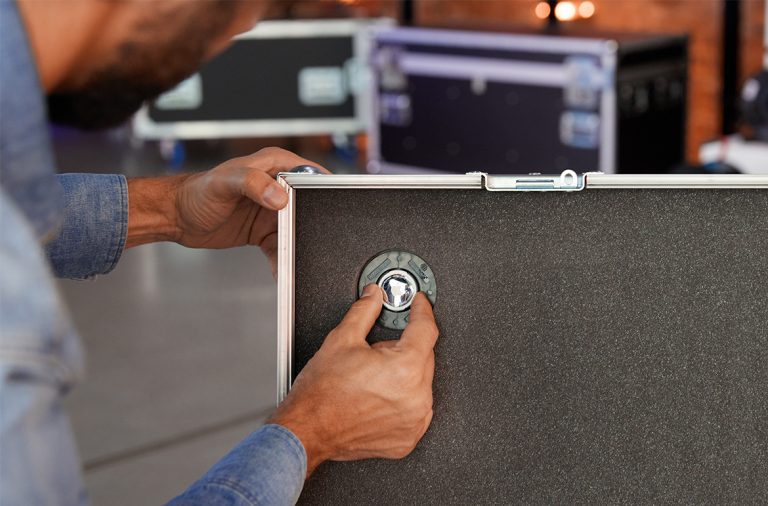 Your bodyguard for flight ca ... 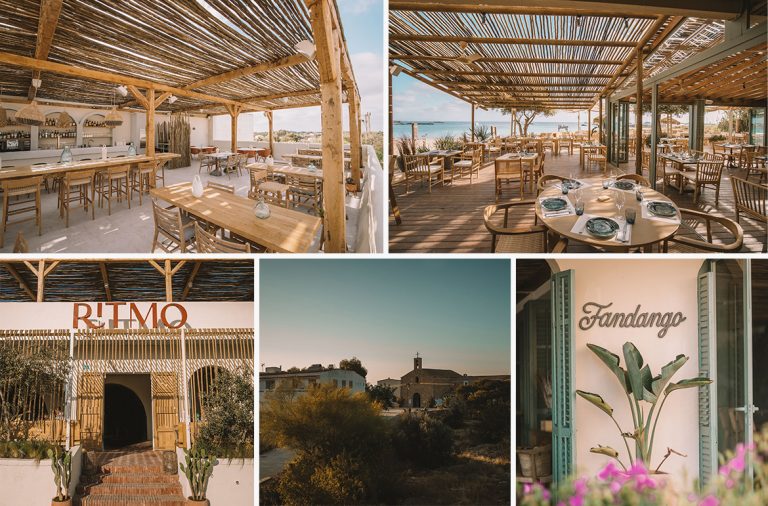 Enjoyable sound under the ma ...